Blowin' in the Planetary Wind

Artist’s concept of the Sun-like star HD 209458 being transited by its close-in, gas-giant planet. In visible light (left) the planet’s limb is sharp and distinct. But in the ultraviolet Lyman-alpha wavelength of hydrogen (right), a vast atmosphere of gas trails behind the planet. Recent observations have detected oxygen and carbon in this extended atmosphere.

First it was sodium, then it was hydrogen, now it’s oxygen and carbon. Astronomers are detecting more and more atmospheric constituents of HD 209458b, a gas-giant extrasolar planet that orbits its star at only one-eighth the average distance of Mercury from the Sun.

HD 209458b is remarkable in that it transits the face of its host star. This chance alignment gives astronomers the opportunity to detect absorption features in the star’s spectrum resulting from atoms in the planet’s outermost atmosphere. By carefully comparing the star’s spectrum when the planet is and is not in transit, astronomers had previously discovered sodium and a vast, cometlike trail of escaping hydrogen. In an upcoming issue of Astrophysical Journal Letters, an international team led by Alfred Vidal-Madjar (Astrophysics Institute of Paris, CNRS) reports the discovery of atomic oxygen and carbon as well in the escaping cloud.

Observing at ultraviolet wavelengths with the Hubble Space Telescope’s imaging spectrograph, Vidal-Madjar’s team detected oxygen and carbon absorption lines during four transits last October and November. The elements were in a bloated atmosphere that extends three times the radius of the planet and eclipses 8 to 10 percent of the star’s disk (the planet itself eclipses only 1.5 percent). Calculations by team-member Alain Lecavelier des Etangs (Astrophysics Institute of Paris, CNRS) show that the combined gravity of the planet and the star pulls the atmosphere into an ellipsoid shape reminiscent of a rugby ball. 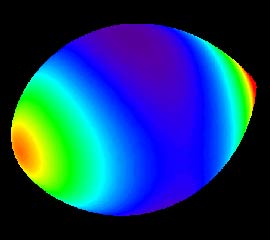 Computer modeling shows that the combined gravitational forces of the planet and star pulls the oxygen and carbon extended atmosphere of HD 209458b into the shape of a rugby ball.

The star, 7th-magnitude HD 209458 in Pegasus, blowtorches the planet’s uppermost atmosphere to a temperature of 10,000 degrees Kelvin, causing at least 10,000 tons of hydrogen per second to escape in a wind. Models suggest that the furious hydrogen wind should carry off other elements from lower in the atmosphere as well, where oxygen- and carbon-bearing molecules are expected constituents.

The planet HD 209458b appears to shed gas at such a high rate that it could lose up to 10 percent of its mass during its lifetime. This, in turn, suggests the existence of a class of whittled-down planets — gas giants close to their stars that were stripped of their outer envelopes, leaving behind rock-iron cores with only a few Earth masses. The next generation of planet-transit searches could identify such bodies.

"The work by Vidal-Madjar’s group is truly spectacular," says exoplanet hunter Geoffrey Marcy (University of California, Berkeley). "The detection of oxygen and carbon atoms in the atmosphere of HD 209458b is telling us about the chemical composition of the planet when it formed. When our group codiscovered the transits in 1999, we never imagined that it would loom as such a rich laboratory for planetary astrophysics."