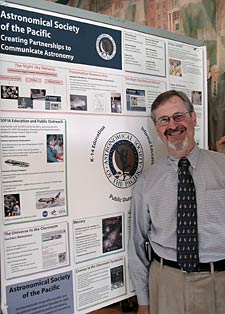 Andrew Fraknoi has organized three Cosmos in the Classroom symposia in the past: in Santa Clara, California in 1996; in Albuquerque, New Mexico, in 1998; and in Pasadena, California, in 2000.

Last July 16–18, about 200 teachers, educators, and scientists from the US, Canada, Mexico, Japan, and Korea gathered at Tufts University's Medford/Somerville campus in Massachusetts for a three-day symposium called Cosmos in the Classroom. Sponsored by the Astronomical Society of the Pacific, the New England Space Science Initiative in Education, and the American Astronomical Society, the event gave participants an opportunity to learn how to present introductory astronomy to nonscience majors more effectively.

"We've had three such symposia in the past and this one is the biggest so far," noted Andrew Fraknoi, chairman of Foothill College's astronomy department and director of the ASP's Project ASTRO national educational program. "The highlight of the meeting was the 40 hands-on workshops where mentor instructors shared their knowledge and love of teaching. For many of the instructors, it was their first-ever astronomy-education conference."

According to Fraknoi, each year an estimated 100,000 to 125,000 students take introductory astronomy courses at nonresearch institutions such as community colleges and state universities that don't offer advanced degrees in astronomy or physics. This represents 40 to 50 percent of the total number of undergraduates taking Astronomy 101 in the United States.

"That's why we made a special effort to reach out and support community-college instructors," he added. 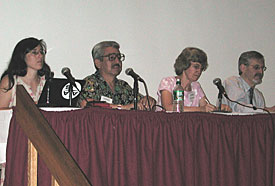 In addition to a full slate of speakers, this year's event featured panel discussions, poster sessions, and forums where participants could share experiences. Topics ranged from online teaching strategies and tools, to debunking pseudoscience. A number of noted professional astronomers also shared their time and expertise with the audience by discussing exciting new developments in astronomical research.

More details about Cosmos in the Classroom are available at the Astronomical Society of the Pacific's Web site.