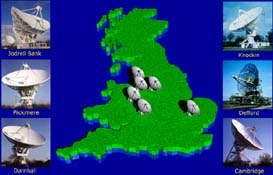 More than a year ago, British radio astronomers feared
that that some of their facilities were about to fall prey to a budgetary
axe. It turned out that the famed 76-meter Lovell radio telescope
at Jodrell
Bank Observatory was never
in danger of being mothballed. Other astronomical facilities were
at risk, however, specifically the Multi-Element Radio Linked Interferometer
Network (MERLIN), seven dishes that combine to create an antenna 217
kilometers across using the technique of very-long-baseline interferometry
(VLBI).

Last week, Britain's Particle Physics and Astronomy
Research Council (PPARC) announced that not only will MERLIN survive,
it will receive an upgrade. The $11-million improvement project will
boost the array's sensitivity by a factor of 30. MERLIN director Philip
Diamond explains that the changes will "enable the enhanced instrument,
called e-MERLIN, to probe far deeper into the universe, achieving
in one day what would currently take three years of continuous observation."
The project, largely an upgrade of network connections between the
antennas using fiber optics, is expected to be completed in 2007.

In another announcement, PPARC outlined the United Kingdom's
continued steps toward joining the international consortium of the
European Southern Observatory (ESO). Britain will officially become
ESO's 10th member in July 2002. As partners, U.K. astronomers will
have access to ESO facilities in Chile, including the Very Large Telescope
(VLT), and will help to fund and plan future projects, such as the
Atacama Large Millimeter Array (consisting of 64 dishes in the Chilean
desert) and the proposed 100-meter Overwhelmingly Large Telescope.
"Joining ESO is good for U.K. science," says Martin Rees, the Astronomer
Royal. "It . . . restores the U.K.'s full competitiveness in optical
astronomy."

For details, see the online press releases from ESO
and PPARC.