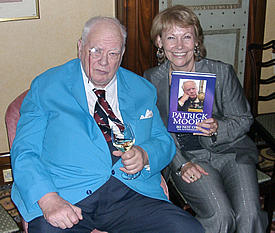 British astronomer Sir Patrick Moore celebrates his 80th birthday with the launch of his long-awaited autobiography. Michèle Brown, director of publishing for Contender Books, holds a copy of 80 Not Out.

During a party held at the prestigious Athenaeum Club in London's Pall Mall on the evening of March 5th, friends old and new gathered to pay tribute to Patrick Moore on the occasion of his 80th birthday (which was actually the day before) and to celebrate the launch of his long-awaited autobiography.

Moore needs no introduction to British audiences. He is best known for The Sky at Night, a BBC program he has broadcast every lunar month since April 1957. It is the world's longest-running TV series hosted by the same person. Besides his numerous television and radio appearances, he has produced more than 60 books and continues to raise the public profile of astronomy and space throughout the world. 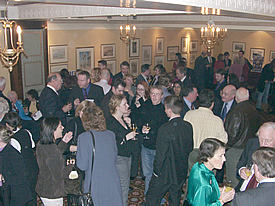 Friends old and new join in Sir Patrick's 80th birthday celebrations at the Athenaeum Club in London's Pall Mall on the evening of March 5th.

Perhaps not surprisingly, many honors and accolades have come Moore's way. A notable year was 2001 during which he was knighted by the Queen of England "for services to the popularization of science and to broadcasting," became a member of the the United Kingdom's Royal Society, and accepted a British Academy of Film and Television Arts award.

In his long and distinguished career, Sir Patrick has met and worked with many famous people. He remembers with affection aviation pioneer Orville Wright and the first man in space, Yuri Gagarin. Moore's specialist subject has always been the Moon, and early Russian and American missions used his maps. Through his NASA research and TV coverage of the Apollo missions, he came to meet every lunar astronaut.

Moore is an accomplished xylophone player, a skilled pianist (who once played along side Albert Einstein), and very passionate fan of the game of cricket. The latter is highlighted by the title of his autobiography: 80 Not Out which has just been published by London-based Contender Books.