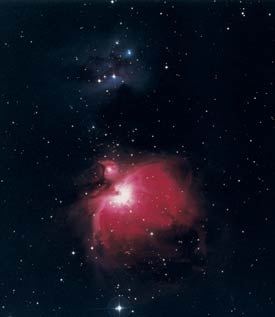 One of the most popular targets for amateurs' telescopes, the Orion Nebula (M42) contains myriad young stars — and a newfound eclipsing binary system with two substellar brown dwarfs.

Gómez Maqueo Chew's team has monitored the "star" over the past three years with the 1.3-meter SMARTS telescope at the Cerro Tololo Inter-American Observatory in Chile. The team nailed down the major characteristics of both of the system's brown dwarfs by garnering two complementary kinds of data: back-and-forth Doppler shifts, which yield orbital velocities, and light curves, which help establish the two bodies' sizes. The more massive member contains 0.053 solar mass and has a diameter of 0.89 Sun. The other contains 0.034 solar mass and has a diameter of 0.70 Sun. Because both objects are young, they have not had time to contract to their final sizes, which will be only about one-tenth the diameter of the Sun. Every 9.78 days, the objects complete one highly elongated orbit, with a semimajor axis of 8.52 solar radii, around a common center of mass.

As with most binary stars, the two brown dwarfs presumably formed simultaneously within the same cloud of gas. If so, conventional star-formation theory confidently predicts that the more massive member should start off hotter and take longer to dissipate the heat from its formation. But that's not what Gómez Maqueo Chew and her colleagues observed. With a temperature of about 2,850° Kelvin (4,670° Fahrenheit), the smaller and less massive brown dwarf is 150° K (270° F) hotter than its partner. "We do not understand why the less massive component is hotter," says Gómez Maqueo Chew.

She says that ongoing observations may improve the team's temperature measurements and that the primary brown dwarf may turn out to be hotter, as theory predicts. Another possibility is that the brown dwarfs have different ages. If the discrepancy cannot be resolved, considerable doubt may be cast on evolutionary models that astronomers use to infer the ages of brown dwarfs and extrasolar planets whose masses cannot be measured with orbital mechanics.