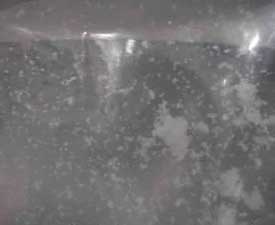 Last year astronaut Donald R. Pettit (NASA/Johnson Space Center) was aboard the International Space Station preparing his weekly Saturday Morning Science program, in which he performed various experiments highlighting the fun things one can do in microgravity. Before him were plastic bags containing salt, sugar, and coffee grounds. The demonstration he had planned that morning was fairly mundane - shake the bags and watch what happens. Little did Pettit know he might be about to solve experimentally one of most perplexing paradoxes surrounding the formation of planets.

For decades theorists have had trouble growing planets starting from small dust grains in a protoplanetary gas-and-dust disk. Given a turbulent disk environment with high winds and high-velocity (100 meters/second) impacts between objects, small, millimeter-size clumps should have difficulty growing to centimeter size and larger without breaking back into millimeter fragments. No one had ever seen it work experimentally. 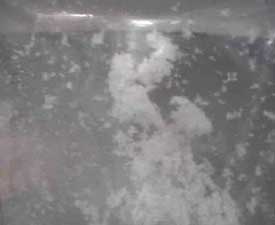 When the salt grains clump together, the fractal structures are much stronger than one might assume.

Pettit proceeded to take the bags of particles and shake them in front of the camera. Within seconds, as the video shows, the grains glommed together to form centimeter-scale structures. These fractal-like globs appear particularly strong, colliding with the walls of the plastic bag and remaining largely intact.

Both Pettit and Love are the first to admit that the experiment is hardly quantitative science. The details are far from controlled or precise. But, even though some quantities may be unrealistic for a protoplanetary disk — such as the particle density and air density — the effect works for different materials that are both homogeneous (salt) and inhomogeneous (coffee grounds). It also works for particles of various sizes, from 0.5 mm through to 6 mm in diameter. 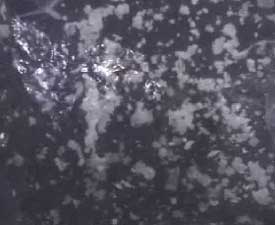 Larger salt grains (1–6 millimeters across) exhibit the same behavior as the smaller particles.

The pair have proposed an explanation for the phenomenon — electrostatics. When Pettit rubbed his finger on the bag, the particles inside were instantly drawn to the place he poked. While the electric charge on each grain is unknown, most experts agree that electrostatics and charge exchanges between particles do occur in protoplanetary nebulae. "We know electrostatics are there. There is definitely charge in nebulae," says Stuart J. Weidenschilling (Planetary Science Institute). Observations like these are "icing on the cake" for proving that electrostatics matter in planet formation, he says.

Steven Desch (Arizona State University), also notes that the idea of electrostatics is hardly far-fetched. He and others have even predicted that lightning is possible in planetary nurseries. We see lightning in various dry environments on Earth such as volcanic ash and sandstorms, says Desch. 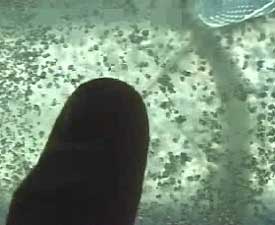 By touching the bag, electric charge is imparted onto the system and the salt particles immediately react. This implies that electrostatics might be the reason for the reaction.

The largest concern about the study is one of scaling. Can salt grains bouncing around in a Ziploc bag truly represent protoplanetary pieces in a primordial solar system? Do the density of particles in the bag, the rate of collisions observed, the apparent strength of the centimeter-scale agglomerations, and the charges within the bag approximate ancient circumstances well enough to say anything about our planet's past? Pettit and Love don't claim to know the answers — they simply presented the experiment as a way to mobilize theorists around a potential solution.

Still, the pair can speculate. When asked by Love if Pettit could make a Jupiter this way, he replied, "I'll need a bigger bag."