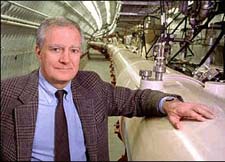 John H. Marburger III, director of the Bush administration's Office of Science and Technology Policy, came to his new post from the Brookhaven National Laboratory.

Courtesy the U.S. Department of Energy.

President Bush's science advisor, John H. Marburger III, warned members of the American Astronomical Society yesterday that researchers are going to have to change their approach to justifying requests for government funding. In his remarks at the society's winter meeting in Washington, D.C., Marburger outlined the administration's approach to science, fiscal management, and specifically, astronomy.

Marburger said that Bush's presidency marks the return of a "business-like administration" to the White House and that scientists, even those conducting basic research, should realize that "measures of performance are essential."

According to Marburger, federal support for science has historically been linked to national defense, specifically to Cold War technologies. After the breakup of the Soviet Union in 1991, the United States was left with an embarrassment of riches — lots of discoveries requiring additional research. "We've got too much," said Marburger. "We can't afford to follow it all up at once."

Marburger says, "This administration supports discovery-based science," but he adds, "[the president] insists on knowing why we are making an investment."

When addressing cost overruns at NASA, Marburger said, "I believe the rest of NASA should be isolated from the problems of the International Space Station." This comment brought thunderous applause from the audience of professional astronomers.

After his talk, in a question-and-answer session with reporters, Sky & Telescope asked Marburger about the Bush administration's apparent trend toward consolidating astronomical projects and facilities. He specifically addressed a rumor that Smithsonian Institution funding for the Harvard-Smithsonian Center for Astrophysics (CfA) in Cambridge, Massachusetts, would be reallocated to the National Science Foundation. Marburger said people "shouldn't conclude from recent [reports] what the [administration's] ultimate goal is. The intent is to get the best science for what we are doing. It is reasonable for Americans to expect a hard-nosed approach." Marburger stopped short of saying whether or not he believes the CfA's funding should be reassigned.