Can Dunlap Obervatory Be Saved?

Despite the plans of the University of Toronto to close David Dunlap Observatory (DDO) and sell the land, plenty of people aren't happy about it.

We learned this week that there is an online petition that calls for the university to call off the sale. I've wondered about Internet petitions. Do they actually work? The one for the DDO has more than 1,600 signatures, but a bunch of them are noted as "anonymous." I find it rather odd to sign a petition and keep it to yourself. I understand that the person's real name is logged in the system and simply not displayed on the website, but it's still curious. 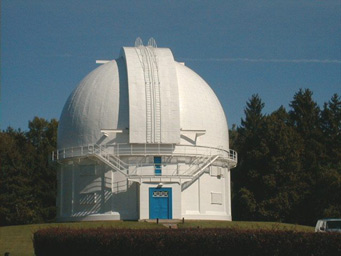 David Dunlap Observatory, with it's 74-inch (1.9-meter) reflector, is set to be sold in mid-February.

The e-mail I received about the petition says that all the names will be printed and taken to the provincial legislature and the university.

Toronto's National Post newspaper has had several articles about the controversy, including how teenagers are trying to save the observatory.

Perhaps equally significant is the story angle about how institutions who receive donations of land and/or money sometimes don't do what they are supposed to do with the bequest. A follow-up article last week explains that a court battle resolved in the university's favor invalidated a clause that said: "should the lands cease to be used for an observatory" it shall "revert to . . . her heirs." This allowed the university to legally sell the property, which is set to close in mid-February.

Changing the rules of a donation sets a bad precedent. Although it probably will never happen, I still occasionally think about winning a lot of money and donating some of it somewhere, perhaps to have an observatory named after me. (Bill Gates donated $10 million to help fund the Large Synoptic Survey Telescope — but he earned his money.) It's sad to think that future lawyers could strip me of the legacy.

Why do we not appreciate the historical and/or the educational significance of institutions? Does greed and economic gain have to rule all our decisions?

I worked with Dr Hogg and her associates for two summers as a promising career lay ahead of me in Astronomy. We were able to photgraph many Globular Clusters with both the 72 and 18 inch telescopes. These were wondderful days indeed! I will remember those summers forever. This was1943-44 and I was a member of the Royal Astromical Society of Montreal for 20 years. Lets Keep the Observatory.

We recently had a situation just outside of Allentown, Pennsylvania, USA, where a township board wanted to use "eminent domain" to take a farm for township usage. We're experiencing big problems with urban sprawl here, located at a busy highway interchange, situated between New York and Philadelphia. So this three-person board tried to take a 100+ acre farm that was willed to a local wildlife organization called Wildlands Conservancy. The development rights for the farm had also been sold to the state as part of a farmland conservation program. But the board was determined to convert it to sports fields and "other structures". These are our supposed "leaders". How disgusting. And yes, they were all voted out with the last election..

I suspect greed and economic gain have very little to do with the observatory's closure; rather, it's more to do with the failings of a socialist society that is strapped with excessive taxation and big government programs. You can only take so much from the producers before diminishing returns to governmental treasuries are realized. The observatory was operational only so long as private money (including taxes)made it a reality. I will agree with the greed aspect, however, if government is seen as the greedy entity.

Here's a link to a TV report showing a protest: http://tinyurl.com/yunmkj

DDO was a famous Canadian Astronomical Observatory when I lived in Canada, albeit I'm originally from Quebec. Dr. Helen
Sawyer Hogg did some of her work there, I seem to recall.
It probably should not be closed for purely economic reasons.
Perhaps, Dr. David Levy, Dr. Ken Tapping, et al., could lend some more Scientific/moral/ethical support therefor, certainly more than I be able, unfortunately.

It seems that humanity needs to strike a balance between living in the past and being aware of just what immediately stimulates our senses. Being aware of the past yields context in which to better appreciate the new. It is a warm and fuzzy feeling when we imagine our venerable astronomical ancestors saying to posterity, "Go to it. You're doing fine." What is new doesn't exist in a vacuum. It is a natural outcome of past experience and thinking. We need to remember this. The past informs the future. Only "lesser creatures" live in the extreme present. There is also a wonderful feeling I, at least, get when I try to imagine our forebears shivering in their observatories while keeping a steady hand on their telescope paddles. Technology can remove us from immediate experience of our subject. Observing from older facilities can replace that immediacy.

Finally, greed in its moderate form of ambition is one great motivating factor in moving our civilization forward. The problem is maintaining balance against excess.