Can Stars Form in our Galaxy's Center? 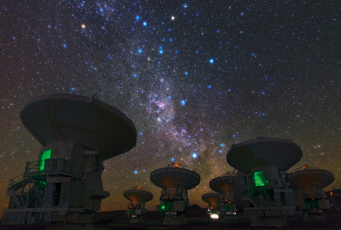 This image shows the splendor of the Milky Way floating above the ALMA radio array. ALMA may have found early signs of star formation just two light-years away from the supermassive black hole lurking at our galaxy's center.

The supermassive black hole lurking at the center of the Milky Way’s brilliant bulge wreaks gravitational havoc on its immediate surroundings. And that doesn’t make life easy for would-be stars: the 4-million-solar-mass behemoth stretches gas clouds into taffy-like streamers before they have the chance to collapse into denser objects. Yet bright and massive stars less than 10 million years old are surprisingly common in the black hole’s neighborhood.

Over the past decade, astronomers have debated how these cosmic youngsters came to be. Did they migrate inward after they formed? Or did a set of unusual circumstances allow the stars to form where they are? Recent observations hinting at early stages of star formation advance the theory that stars regularly form within reach of the supermassive black hole.

In a recent paper, Farhad Yusef-Zadeh (Northwestern University) and his colleagues took advantage of public data to search for signatures of star formation near the black hole. As part of its “science verification” process, the still-under-construction Atacama Large Millimeter/submillimeter Array (ALMA) Observatory had pointed 12 of its radio dishes, each the size of a five-story building, toward the galactic center.

Searching the millimeter-wavelength images, Yusef-Zadeh’s team found 11 clumps of the molecular gas silicon oxide within two light-years of the supermassive black hole. They confirmed the clumps exist using additional images taken by the Combined Array for Research in Millimeter-wave Astronomy (CARMA) in California. The molecular gas lies inside a cavity surrounding the black hole that astronomers previously thought was filled with hot, ionized gas.

Silicon oxide typically appears in warm, dense environments such as those around forming stars. Before they begin to shine by fusion, protostars accrete gas from their surroundings and in the process fling some of that gas outward along their poles. Yusef-Zadeh and his colleagues draw on examples of silicon oxide clumps in nearby star formation regions to suggest that those in the galactic center also come from such protostellar outflows.

If so, Yusef-Zadeh’s team has found evidence for one of the earliest stages of star formation, hinting that stars form right under the beast’s nose. Star formation in the presence of the black hole’s immense gravitational field might not require exceptional circumstances after all.

But Reinhard Genzel (Max Planck Institute for Extraterrestrial Physics, Germany), who was not involved in the study, urges caution in interpreting the results. Though the protostellar interpretation makes sense in the quieter outer reaches of the Milky Way, Genzel suggests another interpretation might be warranted in the chaotic galactic center. Collisions between fast-moving gas clouds could be enough to make silicon oxide clumps glow — no protostars required.

“I am not saying that Farhad’s interpretation is wrong,” Genzel explains. “I am rather suggesting that one ought to perhaps be cautious about transferring interpretations won from much more benign environments into this hostile region.” Genzel suggests follow-up observations, including high-resolution spectroscopy of the dense gas clumps, would prove whether the protostars are really there.

Dozens of stars are observed to be swarming around our galaxy’s SMBH. These stars must be massive themselves, or they wouldn’t be bright enough to even be seen though all the interstellar dust between here and the galactic center. But massive stars have relatively short lifetimes. And a star can have a much shorter lifetime if its orbit gets too close to the SMBH. Therefore it seems obvious that there must be star formation in the area to replenish the observed stellar population. There was a Sky&Tel magazine cover story about 15 years ago that reported on this area around Sagittarius A* (the name of the beast, so to speak) that showed clusters of O & B stars in the vicinity. If you have whole clusters of young stars in the region I’m a bit surprised that there’s even a debate about this in the first place.

Hi Bruce! The question is how did those stars form - did they form further away from the black hole and migrate inwards, or did they form where they are? It's hard to imagine stars forming near the black hole's immense gravitational field. The clouds would need to be compressed to extremely high densities to overcome the black hole's gravitational field in order to collapse into stars. If star formation is indeed ongoing in the galactic center, and this study suggests it is, then astronomers need to figure out what is compressing the clouds enough to form stars. The debate has two parts: first, not all astronomers agree that star formation is ongoing. (And even if they agreed that there is continuous star formation within reach of the black hole, astronomers don't agree on the mechanism that would help compress the gas clouds.)

Thank you Dr. Young for that additional explanation. This area of space is so awe inspiring to contemplate! Whenever I can see the Milky Way’s bulge I like to think about that which lies at its very center. It seems like just a few years ago when we were reading that our galaxy’s Super Massive Black Hole might weigh in at over 2 million suns, now you report that it’s 4 million, and Wikipedia currently states that it’s 4.3! Awesome is so overused today, but this really is: Our sun’s mass is nearly 2E30 kg, while our SMBH is 4.3E6 times that, or 8.6E36 kg! So in this debate among astronomers the question is how close to the beast can stars still form. It seems obvious that no stellar object can form within its Roche limit, so I attempted to find this distance using the approximate Roche limit formula for a fluid body;
d = 2.423*R(primary)*cuberoot(Density(primary)/Density(secondary)), but is this formula even usable with black holes? What is a stellar object’s Roche limit in orbit around our galaxy's SMBH?

On the one hand, we should not expect massive stars near the galaxy’s central SMBH for reasons given; on the other hand, we expect the overall density of the galaxy to increase towards the center. If density is increasing disc>bulge>central-region>SMBH, then it is almost a truism that there must be massive stars near the center. The increasing density of stars towards the center means increased chances for collisions and near-misses. Collisions result in massive stars directly; near-misses result in exchanges of angular-momentum. Generally, the more massive stars will lose AM in the exchange, and migrate inwards, while the less massive stars will get flung outwards (duality). Gas and dust, the feed-stock for new stars, will increase in density as well, but it is more complicated because gas and dust are subject to radiation pressure, whereas stars are not. Whether massive new stars can form there or not, shouldn’t we expect them near the center on statistical grounds?

That’s very reasonable Peter. What I was seeking was a more definitive (mathematical) definition of the areas around a galaxy’s SMBH, as functions of the SMBH’s mass. For example, it should be a total impossibility for stars to form inside the Roche limit for stellar objects, since inside this distance stars are ripped apart by tidal forces. But what is this distance? In the news article Monica Young mentions “within two light years” when discussing the sites where these proto-stellar signs are being found. How close are these areas to the stellar Roche limit? Also, since everything in this area is being so forcefully drawn toward the center, gravitational interactions between orbiting objects will cause things to flow downhill, so to speak, bringing in stars and proto-stellar clouds in from less hostile (to star formation) distances. I imagine that as star forming clouds at the edge of the star formation distance are dragged down inside this distance the stars formation will be arrested, but perhaps the proto stellar jet activity that might be producing the glowing silicon oxide can still proceed for a while? Just a suggestion.

Hi Bruce - a great question! Any star closer than 0.5 a.u. to a million-solar-mass black hole will be tidally disrupted. For a 10 million solar mass black hole, the black hole will tidally disrupt a star closer than 1 a.u. (The tidal disruption radius comes from the Roche limit you describe, but the full equation is a little more complicated than the one you gave in your post.) The distances this article talks about (2 light-years) are far outside the tidal disruption limit, but they are still within the black hole's "sphere of influence", where the black hole's gravity dominates the dynamics.

Peter - I see where you're coming from, but I think you may be overestimating the density of stars in the galactic center. Direct collisions are unheard of (to my knowledge) and even near-misses are quite infrequent. The mass migration you talk about is common in far more dense environments, such as globular clusters, where you do indeed see more massive stars near the center than at the cluster's outskirts.

Thanks again Dr. Young. Extrapolating from the numbers you kindly provide allows a guess of around 0.68 au for our SMBH's stellar Roche limit, which is surprisingly small compared to 2 ly. So, out beyond the 2 ly "sphere of influence" zone star formation can proceed more or less normally, while inside this distance gas accretion is impeded by tidal force. The rate of accretion impedance would also increase with decreasing distance from the SMBH. Since the stars orbiting the SMBH have orbits with widely varied eccentricities I would expect that the eleven glowing SiO clouds found by Farhad's team may have eccentric orbits too. Could it be that they are observing protostars & clouds now inside the too close for stars to form zone who's orbits normally have them outside this zone? Also, since stellar accretion is delayed in this area the time periods for various accretion phenomena to occur should be extended, which might account for the numbers being reported.

may be in the center of galaxy any hydrogen ?