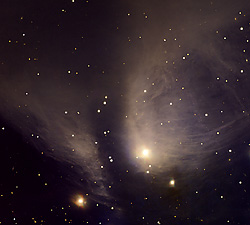 This richly detailed close-up of the stellar nursery RY Tauri some 450 light-years away was captured by the 8-meter Gemini North telescope as part of a contest for Canadian amateur astronomers. It shows the young, low-mass star (below center) emerging from the vast cloud of gas and dust from where it was born. RY Tauri varies irregularly in brightness between 9th and 11th magnitude.

How would you like to obtain observing time with the 8.1-meter Gemini North reflector and the 3.6-meter Canada-France-Hawaii Telescope (CFHT) atop Hawaii's legendary summit of Mauna Kea? Sound like an amateur astronomer's pipe dream? Well, two amateur clubs in Canada did just that, and they have the images to prove it.

The Club d'astronomie de Dorval, Quebec, and the Big Sky Astronomical Society of Vulcan, Alberta, won the opportunity by besting more than 100 amateur societies in a Canada-wide contest organized by the Canadian Gemini Office last year. The contest solicited proposals from the clubs, asking them which favorite celestial objects they would like the telescopes to target and why they thought this would be important. The winners received an hour's worth of observing time with Gemini North and CFHT, respectively, which are both partially owned and operated by Canada.

Two deep-sky objects in the constellation Taurus were selected: the nascent star RY Tauri, proposed by the Dorval group, and the famous Pleiades star cluster, suggested by the Vulcan group. The images were presented to them during the annual meeting of the Canadian Astronomical Society in Montreal on May 15th.

"It's a way to thank the Canadian amateur astronomers and to recognize the important and continuing role they play in bringing astronomy to the public and supporting astronomical science," says Canadian Gemini astronomer Stephanie Cote.

The image of RY Tauri, taken with the Gemini Multi-Object Spectrograph last February, shows the young variable star emerging from its dusty cocoon. The Pleiades mosaic was assembled from two tricolor images obtained last December by MegaPrime, CFHT's new wide-field camera that is capable of capturing more than a square degree of sky in one frame. The data were acquired in "queue-observing mode," meaning the staff astronomer on duty was the one who selected the best times to image the targets, so there was no need for any of the amateurs to travel to Hawaii.

"Our group knew that RY Tauri was unique and had not been observed in detail with a big telescope like Gemini," notes Gilbert St-Onge, a member of the Club d'astronomie de Dorval. "I feel like we've not only made a pretty picture, but probably provided some new and valuable data for the pros!"

"This object is a classic [T Tauri], and one of the first-known examples of this type of young star," says Gemini astronomer Tracy Beck. "I believe this is by far the deepest and most detailed image ever taken of this object, and scientists will no doubt use this data for important research in the future."

"The Gemini image of RY Tauri came out really well," says Cote. "In fact, all the filamentary structure around RY Tauri was never seen before and is unusual, that's why I have no doubt that Gilbert St-Onge, who has been studying this object for many years, will be participating in a paper in a refereed astronomy journal with this data."

James Durbano, a member of the Big Sky Astronomical Society, believes that the Pleiades image "will inspire many students across Canada to develop a lifelong interest in the science of astronomy."

Canadian amateurs who missed out on this opportunity might be able to get a second chance. The organizers say the contest will probably be run again at a future date. So stay tuned!