Capturing the Beauty of the Night Sky

From Comet Lovejoy in the southern skies to the aurora borealis over Iceland, the winners of the 2012 International Earth & Sky Photo Contest find beauty in darkness and show the threat of increasing light pollution.

The Earth & Sky Photo Contest was organized by

The World at Night,
Global Astronomy Month, and the
National Optical Astronomy Observatory. 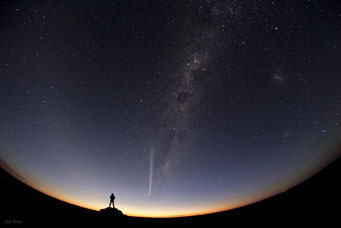 First place in the Beauty of Night Sky category goes to this wide-angle shot of Comet Lovejoy over Australia. The rising morning twilight, zodiacal light, and Magellanic Clouds are all well framed. This deceptively simple-looking image illustrates the true secret of skyscape photography: being in the right place at the right time.

The theme of the contest was the importance of dark skies, so submitted photos were judged in two categories: Beauty of the Night Sky and Against the Lights. Each category had five winners, and 25 other notable photos are featured in our contest video. All images were created in the "TWAN style," combining elements of the night sky with a notable location or landmark.

Images were submitted during Global Astronomy Month in April 2012. To feature the latest sky events, showcase emerging starscape photographers, and document current light pollution, all submissions had to be taken since the beginning of 2011. 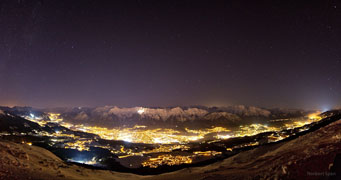 First place in the Against the Lights category went to Norbert Span, who captured the sky above the city Innsbruck in the Austrian Alps. The Alps preserve some of the last remaining dark skies in Europe, so controlling light pollution in the nearby cities is essential to protect this unique natural heritage.

The selected images illustrate how important and amazing the starry sky is, how it affects our lives, and how bad light pollution has become. Excessive light that scatters to the sky instead of illuminating the ground isn't just an astronomer's problem. It's a major waste of energy, disrupts ecosystems, and has adverse health effects.

Astronomy outreach programs and rapid advances in DSLR cameras have created a growing interest in nightscape photography. Contest entries were double compared to 2011. They came from 50 countries and territories, with a notable grow of submissions from Europe and Asia — especially China, India, Iran, and Indonesia. 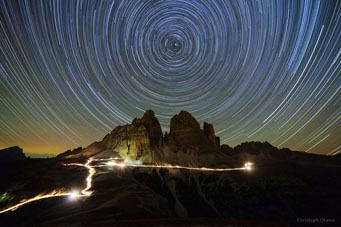 The rugged peaks of the Tre Cime di Lavaredo in the Italian Alps are famous among mountain climbers and landscape photographers, but few have attempted to capture their nighttime beauty. German astrophotographer Cristoph Otawa won second place in the Beauty of the Night Sky category with this 3-hour-long circumpolar startrail image. It shows a natural combination of stars and night-time landscape lights, considering that digital startrails images often lack star colors or display the sky filled with too many stars because of high ISO settings or oversaturated processing.

Starscape photography is fast and easy using off-the-shelf digital SLR cameras. But for those who aim for serious landscape astrophotos there are challenges too: going to bizarre locations, planning carefully to be in the right place at the right time, and making the effort to learn some practical astronomy. Unfortunately many photographers who shift to nightscape style are unfamiliar with astronomy and in particular with the natural look and color of the night sky. We had some stunning compositions and amazing night-time landscapes among the contest entries, some made by famous photographers, that were ruled out because they had "over-cooked" processing with strongly saturated colors, unnaturally high contrast, and sometimes completely inaccurate color palettes. We received images of the Milky Way in nearly all the colors of spectrum, some processed it to romantic blue, some purple, red, or even green — but surprisingly few with a natural-looking pale yellow Milky Way. Examples of natural-color Milky Ways are Akira Fujii's images from the Southern and Northern Hemispheres, Stephane Guisard's image from Ecuador, and my own images from the Alps and Brazil. 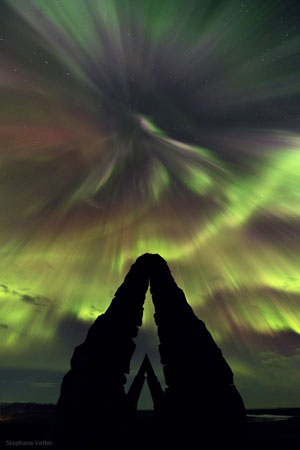 Stephane Vetter won third place in the Beauty of the Night Sky category with this aurora over Iceland's Arctic Henge, which was constructed in modern times to celebrate the midnight Sun. With solar activity approaching its expected maximum in 2013, the Earth and Sky contest saw a remarkable number of aurora photos, many taken in March 2012.

Altering natural colors is considered fakery in landscape photography, and this should be the same in landscape astrophotography. If you publish a photo of a blue sunset it’s clear that either there is something badly wrong with your camera/processing or you were the first human on Mars to see this view! Unfortunately the public, publishers, and media get easily excited with such exotic looking images of the sky without asking if this is anywhere close to reality. This might encourage photographers to create fake-color night sky images, a trend that must be countered by photo-contests like ours.

Part of the problem is due to the photoprocessing required to remove the red cast of light pollution and the peculiar color balance of DSLRs that have been modified to make them sensitive to hydrogen-alpha emissions from astronomical nebulae. A modified camera is an essential component of my work, but it took me a long time to bridle this strongly sensitive but rebellious device!

Our winners don't have exotic colors, an overly contrasted Milky Way, or digital composites of widely different exposures and settings. Although creativity and extreme challenges is open in all fields of photography the main aim here is to capture what was experienced by the eyes of photographer at the scene.

Fourth place in the Against the Lights category again went to Norbert Span, this time for a photo of the floodlights of a ski resort in the Tyrolean Alps overwhelming the beauty of the starry sky.

A rising number of people have become aware of the dark-sky movement thanks to organizations such as the International Dark Sky Association, UNESCO's Starlight Reserves, and Globe at Night, as well as the growing industry of astrotourism.

The night sky is an essential part of our nature. Humans have been inspired by the starry sky for millennia. But now more than half of the population live under light-polluted skies, not dark enough to see the Milky Way. A real dark sky is something that everyone should experience, a moment that you will not forget in your entire life. The patchy glow of Milky Way, our home galaxy of billions of stars shimmering from the far, stands above the horizon of a little planet in this cosmic ocean. This might sounds like a science-fiction scene to many young people, but it's still easy to experience away from the cities and in preserved dark sites.

We intentionally tried to display a contrast in our selection of notable photos. Bright Milky Way and elegant skies dazzle viewers in some images while only one “star” appears in others. The "star" is in fact a bright planet, the last standing object in an urban sky. This comparison shows what is gone with the lights, the beauty we are missing today in urban life.

Babak A. Tafreshi is a freelance photographer, science journalist, and astronomy communicator. He is founder and director of The World at Night (TWAN) program, a board member of Astronomers Without Borders, and a contributing photographer for Sky & Telescope.