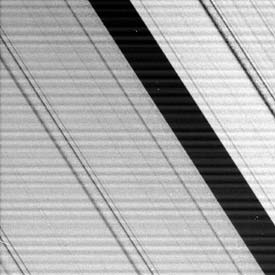 This narrow-angle camera view of Saturn's rings shows incredible structure. Note the sharp edges and boundaries separating the gaps and the ring material. In this raw image, the white dots represent cosmic-ray hits; the horizontal bands are electrical noise. Both will be removed with image processing.

Scientists, engineers, and space enthusiasts alike have much to celebrate today: the Cassini orbiter, with its Huygens probe riding piggyback, is safely orbiting Saturn. In the process, the craft's cameras captured the closest-ever look at the planet's icy rings. The procedure went just as planned, says Cassini flight director Julie Webster (Jet Propulsion Laboratory). The spacecraft "couldn't have performed any better."

Saturn orbit insertion, or SOI in NASA parlance, was hardly a simple task. After its October 15, 1997, launch the Cassini spacecraft used gravity assists from Earth, Venus, and Jupiter to slingshot to its 1.5-billion-kilometer-distant target (the craft has traveled 3.5 billion km in total thus far). Once it arrived the craft fired its rockets for 95 minutes to slow it enough for Saturn to capture it into orbit. A rocket failure would have allowed the planet to shoot Cassini out of the solar system, thus turning a four-year orbiter mission into a brief and disappointing flyby.

Engineers had designed the SOI to achieve a 117.4-day orbit around the planet. Preliminary data suggest the current orbit is 116.3 days ± 18 hours. "We are right there," says Cassini navigation team chief Jerry Jones (JPL). The rocket burned with 1 percent more thrust than expected, causing the craft to automatically cut off the 96-minute firing a minute early.

To achieve its orbit Cassini first dove through a gap between Saturn's outer F and G rings. After the burn was complete, Cassini turned on its high-power camera to see the rings. From its position, flying above the plane of the rings, the bands were backlit by sunlight. Additionally, the shots were taken when the craft was the closest it will ever be to the rings during its primary mission. 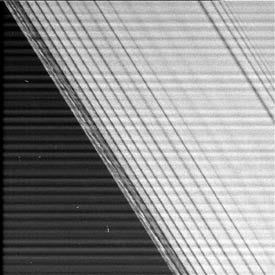 Above is a density wave within Saturn's ring. Also note the sharp edge marking the end of one ring structure.

The new images show amazing structure. Density waves caused by the gravitational interactions of moons on particles are clearly apparent. Also made obvious in these photos are the rings' sharp boundaries. According to Carolyn C. Porco (Space Science Institute), team leader for the Cassini camera, very sharp edges suggest that there is some physical process halting the particles from spreading. Tiny embedded moonlets are the most likely gatekeepers.

Other SOI science results will be made available later today and in the coming days. Stay tuned to SkyandTelescope.com for further developments.

The excitement has just begun for the orbiter and its probe. Armed with a dozen instruments including cameras, a magnetometer, a mass spectrometer, and a radar sounder, Cassini will answer a host of lingering questions about the solar system's second largest planet. These include gaining a better understanding of the Saturnian atmosphere, measuring the planet's magnetic field, mapping the size and distribution of its ring system, and perhaps most intriguing, investigating the icy moons such as Titan and Enceladus surrounding the ringed gem.

To accomplish these tasks over the next four years the science team will make more than 60 moon encounters — 45 of which will provide close-up views of the mysterious moon Titan. To gain a better understanding of this cloud-enshrouded body Cassini will release its Huygens probe on Christmas Eve, 2004. Twenty days later, on January 14, 2005, Huygens will enter Titan's atmosphere, sampling its chemical compounds as it parachutes down to the surface. Whether it will crash land or splash down into a sea of liquid ethane, as some speculate, remains unknown. The first close Titan flyby occurs on October 26th at an altitude of only 1,200 km.

Until then, scientists will enjoy the bounty of data that SOI provided. Says Porco, "We stand to learn a lot by studying pictures like we see here. We are going to have a field day with these!"

Pluto Mission Gets Boost in Congress 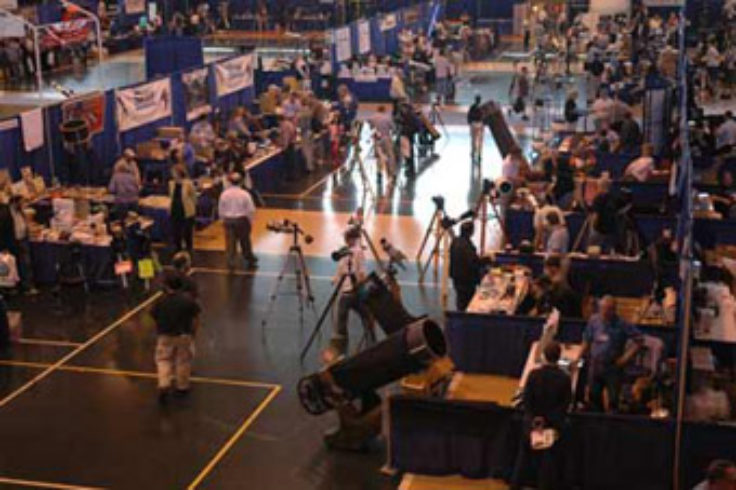 See You at the Telescope Show