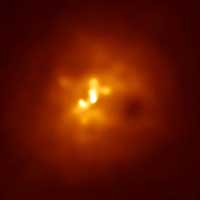 This false-color image from the Chandra observatory depicts X-rays emanating from multimillion-degree gas within Abell 2597. The central hot spot marks the heart of the cluster's dominant galaxy, which contains a supermassive black hole. New research suggests that the dark void near the cluster's edge is a long-lived bubble that formed when the black hole briefly spouted jets of high-speed particles.

Scientists using the Chandra X-ray Observatory have documented the existence and longevity of buoyant magnetic bubbles in a distant galaxy cluster. And in doing so, they may have discovered how magnetic fields came to permeate galaxy clusters — the largest gravitationally bound structures in the universe.

Brian McNamara (Ohio University, Athens) and his colleagues used Chandra to image the multimillion-degree gas permeating Abell 2597, a galaxy cluster more than 1 billion light-years from Earth. Chandra observed several vast cavities in the cluster's otherwise ubiquitous plasma. Similar holes had been seen in another galaxy cluster, Hydra A, McNamara notes. In Hydra A's case, radio telescopes revealed those cavities were filled with magnetized jets of gas streaming from the cluster's central galaxy — just what one would expect if those jets had blown bubbles in the plasma flooding that cluster.

But radio telescopes have not revealed any jets within Abell 2597's expansive cavities, which span tens of millions of light-years. The implication? According to McNamara, the cavities in Abell 2597's gas shroud "were probably created . . . about 100 million years ago and rose like bubbles in a Coke bottle." Powered by a still-mysterious process involving accretion onto a supermassive black hole, the bubbles' birth event probably only lasted about 1 million years. The gases that briefly jetted out from Abell 2597's central galaxy were threaded with relatively strong magnetic fields, McNamara adds. Those fields presumably rose along with the long-lived bubbles and keep the surrounding X-ray-luminous gas at bay.

"It's always been a mystery why we see dynamically important magnetic fields . . . in this type of cluster," McNamara says. Now, thanks to the new Chandra study, "it's plausible to explain all of these magnetic fields as being burped out of the black hole." The finding has broader implications for galaxy evolution. "These [central] black holes are depositing an enormous amount of energy into the centers of these clusters," with each bubble containing the energy equivalent of 1 million supernovae, "and [they] may have played an important role . . . in the shaping of the galaxies themselves."