The enigmatic galaxy group known as Stephan's Quintet has intrigued astronomers ever since 1877, when French observer Edouard Stephan noted the unusually compact gathering in northwestern Pegasus. And with the hindsight afforded by
the space program, it's no wonder. Astronomers now know that the quintet's unusually close-packed members are embedded in gasses that they may have stripped from one another. What's more, a multitude of stars are being born within some of that orphaned material. "Stephan's Quintet is a happening place,"
says aficionado Jack Sulentic (University of Alabama). "You're seeing all the things that can happen to a compact group all rolled into one."

The latest views, from the Chandra X-ray Observatory, support a longstanding suspicion about one particularly violent episode in the galaxy family's recent history — namely, that the 14th-magnitude spiral NGC 7318B is ramming into the rest of the group at supersonic speed. According to a just-published study led by Italian astronomer Ginerva Trinchieri (INAF–Astronomical Observatory of Brera), Chandra has taken the sharpest pictures yet of extremely hot gas in a narrow ribbon just east of NGC 7318B. That gas, say the scientists, was compressed and heated to a temperature of 6 million degrees when NGC 7318B plowed into the rest of the group at 1,000 kilometers per second (2 million miles per hour) or more. 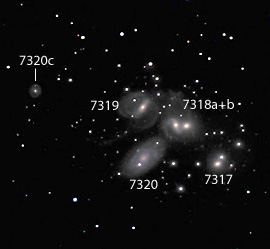 This outstanding CCD mosaic by astroimager William McLaughlin shows Stephan's Quintet glowing at RA 22h 36m, Dec. +34.0°, a half-degree south-southwest of 9th-magnitude NGC 7331 (Caldwell 30), which is only one-sixth as distant and can be seen through binoculars on a clear, moonless night.

The wayward spiral's assault upon the rest of Stephan's Quintet had been suspected since the now-defunct Rosat spacecraft imaged the X-ray glow in the mid-1990s, albeit fuzzily, and the Hubble Space Telescope discovered newborn star clusters in what appears to be the collision's debris. But according to coinvestigator Sulentic, the new Chandra study exploited that satellite's superior angular resolution to resolve the shock front's leading edge — the intergalactic equivalent of a sonic boom. Chandra also pinpointed X-rays from the nucleus of Quintet member NGC 7319, a so-called Seyfert galaxy whose energetic core likely draws power from a supermassive black hole.