India's first deep-space mission has chalked up another success during its glitch-free mission. Having maneuvered into its final orbit, 60 miles (100 km) above the Moon, the Chandrayaan spacecraft released an instrumented, 75-pound (34-kg) probe on November 14th that slammed into the lunar surface 25 minutes later.

We've been using the Moon for target practice for decades. Back in the 1960s, the sole objective of U.S. Rangers and some Soviet Lunas was simply to crash into it. Apollo missions routinely slammed discarded hardware into the surface at high speed to trigger measurable seismic shocks. More recently, in July 1999, NASA's Lunar Prospector struck the Moon and, in the process, delivered cremains of the legendary lunar geologist Gene Shoemaker. 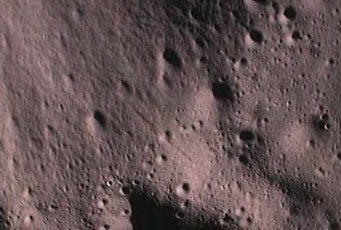 An image of the lunar surface recorded by Chandrayaan 1's Moon Impact Probe (MIP) during its descent on November 14, 2008.

The MIP's sides were emblazoned with the tricolored Indian flag, and an online announcement from the Indian Space Research Organization noted that the impact occurred on Pandit Jawaharlal Nehru’s birthday.

Meanwhile, instruments on the main spacecraft (10 in all) are being tested and calibrated for what promises to be a scientifically productive two-year mission.

Hay India, good job!!!! Keep it up and you will be in the ranks of NASA, ESA, and the Russian space program.

India has always been an spiritually & culturally strong country but now it has joined the league of Big Nations in the field of Space Technology also. It is a great achievement keeping in view that it was put under embargo because of Nuclear tests done by it. It shows the Great Will of its leaders & scientists. Congrats to all involved in its success.

I don't suppose there are any images/videos of the impact probe hitting the surface? Or were any astronomers able to view it from Earth?

Knowing that the moon's acceleration constant is approximately 1/6 of the earth's "g" at around 981 m/sec^2, I arrive at 1'839.375 km of height if I plug in 25 minutes, or, alternatively, I arrive at 5 min. 49.75 sec. of elapsed time if I plug in 100 km initial height, the formula to plug in to being s=(g/6)*(t^2)/2; "s" stands for the straight path in the direction of "g", beginning at 0 meters; "g" stands for around 9.81m/sec^2, the earth's acceleration constant; "t" stands for the time elapsed, beginning at 0 seconds.
What am I doing wrong here!? Must one consider an initial velocity downwards, towards the moon? Why and which? Any other component of an initial velocity should not impact the downward component calculation, I think.
Please enlighten me, thank you.

The reason is that the probe doesn't drop straight down. The probe starts out attached to Chandrayaan 1 in orbit around the moon. In that condition it is being accelerated toward the moon at 9.81/6 m/s^2 but it never hits the moon because it has enough tangential (perpendicular to the g vector) velocity to keep it in orbit. When the probe is released, a retro-rocket or some other device reduces its tangential velocity, but not all the way to zero. So the probe arcs down rather than falling straight down. The distance down that it falls is indeed the distance you calculated (physics demands that it be so), BUT the probe is traveling around the moon as it falls (in effect it keeps missing the moon - falling past it). This can be a tough concept to get your mind around the first time you hear it - drawing the path out on paper may help. Good luck.

Thanks, Larry, for taking the time to reply. As I stated (asked!) in my last sentence, any vector component other than the one perpendicular to the moon's surface (the direction of the gravitational acceleration vector at g/6) should only attribute to the falling of the probe with its vertical component, I thought. So, whatever you assume for initial vectors, be it the "horizontal" speed of Chandrayaan or the probably "anti-horizontal" thrust of a possible breaking rocket or anything else, for that matter, may be split up into a horizintal and a corresponding vertical component. Each horizontal component can not attribute to or take away from the g-vector, but each vertcial component can and will. That is why I was wondering what OTHER vertical components might interfere here since Chandrayaan as well as any retro-thrusts have practically exclusively horizontal component portions. There is no significant air resistance either as there would be on earth. Which still keeps me asking which vertical vector component there could be in addition to "g". Something I completely miss must produce a massive upwards component to make the total time 5 TIMES greater than free fall would. Or, the other way round: to reduce the initial height necessary by a factor of more than 18!?
Any further suggestions?

Thanks Seshagiri and thanks Larry, too since he tried to explain to me what you, Seshagiri, have put in such a new way to look at things: great! I have come to notice my mistake before though: of course, I forgot -just to put it in more physical words- to consider the centripetal/ -fugal force completely, of course: mv^2/r, always still neglecting relativistic effects, by the way. Thus, my calculations considered only half of the story, namely, the gravitational pull between the bodies directly. But like you two tried to make me see, there is also the tangential/ horizontal component of the forces/ velocities to consider, as opposed to the vertical/ centripetal/- fugal ones. Therefore, so long as the vertical force GmM/r^2 (~mg) between two bodies outweighs the centripetal mv^2/r induced by the tangential component v a body falls toward M. So long as they out-balance eachother body m is in stable orbit around M and if v transgresses sqrt(GM/r) body m goes into forms of conic section curves other than circles/ ellipses which are parabolas/ hyperbolas. I haven't gotten around to calculate whether -with the above in mind- the times given in the above article make sense to me though but I'm confident that they will ;-]; even more so, I guess, they MUST be right since well-renowned scientists have made these calculations, not just an amateur astronomist like I am;-}! Thanks again, guys!