In a triumph not accomplished since 1976, today a Chinese spacecraft safely descended to the lunar surface. Within hours, it had deployed a six-wheeled rover called Yutu. 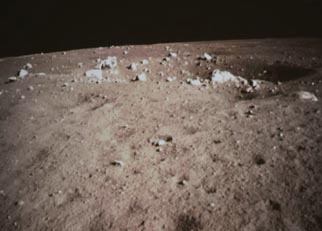 The lunar surface surrounding the Chang'e 3 spacecraft, as captured shortly after its landing on December 14, 2013. Click here for a larger version.

Everything went according to plan today for Chang'e 3, the Chinese lunar spacecraft launched just two weeks ago. At 13:11 Universal Time (evening at the control center in Beijing), the craft descended onto Sinus Iridum, a flat volcanic plain along the northern margin of Mare Imbrium. Laser-altimeter and radar-ranging sensors helped guide the lander during its descent from a low orbit. The landing site is at 44.1°N 19.5°W.

The 1,200-kg (2,600-pound) lander is equipped with two panoramic cameras, which showed the surrounding terrain to be relatively flat with a modest crater nearby. In addition to hazard-avoidance cameras, the rover's instruments include a radar on its underside, which can probe beneath the surface to depths of perhaps 30 m (98 feet), and X-ray and infrared spectrometers to analyze the elemental composition of lunar samples.

This landing marks the first time a spacecraft has "soft landed" on the lunar surface (as opposed to crashing into it) since the Soviet Union's Lunar 24 sample-return mission arrived in 1976. The successful arrival of Chang’e 3 marks the first time China has landed anything on an extraterrestrial body.

A monitoring camera aboard the Chinese lander Chang'e 3 records the deployment of a rover, named Yutu, onto the lunar surface.

In Chinese folklore, Chang'e is the Moon goddess. Yutu, meaning Jade Rabbit and chosen after an online poll, comes from a Chinese myth about a white rabbit that lives on the Moon.

Chang'e 3 is the third spacecraft in China's lunar-exploration program. CLEP officials hope that the scientific and engineering data gathered from this mission and its predecessors — Chang'e 1 and Chang'e 2 — will pave the way for future astronauts.

Bravo, it is a wonderful thing. I hope they succeed in taking mankind back to the moon. The yutu rover looks cool!

This is a major step in humanity's return to the moon. Congratulations to all members of the team that made it possible!

Yes, congratulations and best wishes to the Chang'e 3 team for a successful mission. Although I hope that space exploration will become a global undertaking, rather than an expression of nationalism.

All of the planners, controllers, engineers, workers, and everybody else involved, as well as the entire Chinese nation, deserves to take great pride in this accomplishment. I think one of the most positive aspects of this is that the entire mission was done in full view of the international media, despite the numerous technical (and PR) risks involved.

And now a word from the informed independant public of the world: Congratulations China you can stand up on the international podium, proudly holding up one of your impossibly tiny blurry photos of the moon and exclaim to the world "behold our incredible technology! Tremble at the power and the glory, China lies with the best.

Leaving all politics and nationalism aside, I just want to express happiness that this mission has been successful so far. Just because our Moon is relatively close doesn’t make this accomplishment cheep or easy. Otherwise, it wouldn’t have taken so long between successful landings. And I’m very happy that human beings are beginning to put the Moon to use as a stable platform for the telescopic study of space. This use of the Moon is so logical, why hasn’t it been done before now? I hope and believe that one day, a more united human family will be able to utilize our nearest neighbor in space to study the sky as never before. Imagine how the Moon might be used for telescopes of all types and sizes! With sufficiently advanced technology, even observatories larger than anything conceivable on earth might someday be constructed on the Moon.