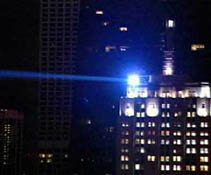 The new, powerful beacon atop Chicago's Palmolive Building during its first test on August 29th.

The Windy City will soon be a bit brighter, thanks to a new seven-billion-candlepower beacon poised to shine atop Chicago's Palmolive building late this year. Members of the Calumet Astronomical Society (CAS) oppose the project, claiming that the beacon's intense beam will adversely affect their $250,000 public observatory currently under construction at Indiana Dunes State Park, 35 miles (56 kilometers) away.

"The light would affect not only astronomers but wildlife as well," says William Bahus, CAS director of Light Pollution Education. "The Audubon Society reports that each year millions of birds are killed when they become confused by bright lights and fly into buildings and other structures." In addition to wasting energy, there is also concern that the beacon could pose a hazard to low-flying aircraft by causing unwanted glare.

"These issues are not entirely founded," responds Peter Bazeli, assistant vice president of Draper and Kramer, the building's developer. According to Bazeli, the beacon is quite energy efficient. The company has already hired lighting and aviation consultants to redesign the beacon, says Bazeli. Plan call for added baffles and shields to minimize light trespass into surrounding skyscrapers. Moreover, the firm also plans to participate in the city's Lights Out for Birds program by turning off the beacon during the peak migration season.

Unlike Palmolive's original Lindbergh navigational beacon, named after the legendary aviator, which operated from 1930 to 1981 and rotated 360°, the new $88,000 beacon will only sweep a 120° arc toward Lake Michigan. Bazeli admits that its purpose is purely decorative. "It's meant to enhance the building's art deco design," he says. "It marks the return of a Chicago icon. It's part of our architectural heritage. Our beacon is just one light among many in the city."

But CAS members remain unconvinced. They have started an online petition urging Draper and Kramer not to turn on the light, except during special events.