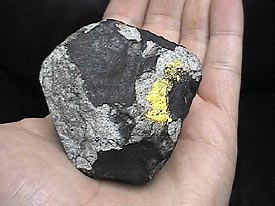 This 212-gram fragment of the Park Forest meteorite fall grazed a yellow fire hydrant as it fell to Earth.

On the night of March 26th, shortly before midnight, residents of several Midwestern states witnessed a dazzling — and, to many, frightening — spectacle in the sky. A brilliant fireball appeared over central Illinois and moved north, ending its fiery descent through the atmosphere in at least two bright flashes just south of Chicago. Powerful sonic booms soon shook the landscape and were detected as far away as western Canada.

Shortly thereafter, many people in the suburban town of Park Forest awoke to the sound of rocks clattering down on their neighborhoods. Paul Sipiera (William Rainey Harper College) and James Schwade (Planetary Studies Foundation) have been mapping the extent of the meteorite fall. "At least six houses and three cars in the town of Park Forest and surrounding area were damaged," Sipiera says. He estimates that the debris fell in an elliptical-shaped strewnfield approximately 10 kilometers long and several wide.

Residents have found meteorites on roads, on lawns, and in woods. One 3-kilogram chunk crashed through a resident's roof and kitchen floor, bounced off the basement floor, and landed on a table. A slighly smaller fragment fell through a roof, hit a window and shredded its venetian blind, bounced off the windowsill, and finally destroyed a large mirror — narrowly missing a sleeping teenager.

The original body may have been nearly as big as a car before it broke apart in the upper atmosphere. Steve Simon, a meteorite specialist at the University of Chicago, says it was a relatively common type of ordinary (rocky) chondrite classified as L5. Some of the fragments consist of ancient impact melt, suggesting that the incoming object may have originated near the surface of its parent asteroid.

Ultralow-frequency sound measurements made 1,100 km away in Manitoba indicate that the fireball released the kinetic-energy equivalent of 0.5 to 1 kiloton of TNT, much more than conventional explosives but much less than most atomic bombs. If the meteoroid arrived with a velocity typical of objects from the asteroid belt, then it probably weighed 10 to 25 tons and was about 2 meters in diameter. Meteoroids this size hit Earth about a half dozen times per year but rarely over thickly settled areas. Park Forest (the event's provisional name) is the largest meteorite fall in the United States in the last five years and the first to drop hundreds of fragments over a major urban area.

Analysts have collected several videos recording the bolide's motion. If additional videos from other viewing angles can be found, it should be possible to determine an accurate orbit for the wayward object before it encountered Earth. Therefore, anyone with such videos or other accurate positional data should contact me. Success would make Park Forest only the eighth meteorite with an accurate, instrumentally determined orbit.