Legend has it that Nicholas Copernicus didn't see a printed copy of his world-shaking De Revolutionibus Orbium Coelestium (On the Revolutions of the Celestial Spheres) until hours before his death at age 70 on May 24, 1543. 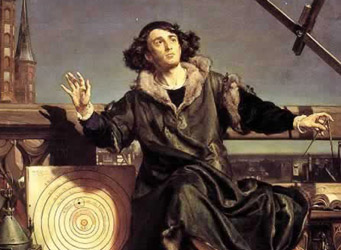 You'd think that someone who rocked the foundations of astronomy would have been buried in a conspicuous place of honor. But, in those days, it was customary for local church officials (Copernicus was a canon) to have unmarked graves. Historians assumed that the Polish astronomer had been buried somewhere beneath the floor of Frombork Cathedral, but for centuries his remains' whereabouts were an archaeological mystery.

At the urging of Jacek Jezierski, a local bishop, the hunt for Copernicus's remains began anew several years ago — no doubt aided by Galileo's improved standing with the church and advancements in forensic technology. Sure enough, in 2005 archaeologist Jerzy Gassowski unearthed the cranium and bones of a 70-year-old man whose DNA matched that of a hair found inside a book in Copernicus's library. Real-world CSI! 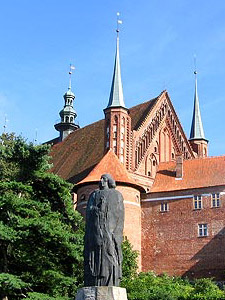 A statue of Nicholas Copernicus near the cathedral in Frombork, Poland. The famous astronomer's remains are interred in the church's floor.

Yesterday, amid considerably more pomp than he got 467 years ago, Copernicus was again laid to rest in the cathedral. This time Poland's highest-ranking clergymen officiated as an honor guard escorted his casket to the original burial site. The grave's black granite tombstone, adorned with six planets encircling a golden sun, now trumpets his authorship of the modern heliocentric theory.

"Today's funeral has symbolic value in that it is a gesture of reconciliation between science and faith," noted Jezierski. "Science and faith can be reconciled."

One of the attendees was Harvard-Smithsonian astronomer Owen Gingerich. "The coffin with the bones was carried to the crypt at the end of a long requiem Mass," Gingerich reports. "Within a few hours the granite slab was in place over the crypt, and the tiles of the floor were cemented into place over it, leaving a glass window the exact size of the large tiles so that it is possible to look down to the coffin. The position of the crypt was within a meter of the original place where the bones were found."

The monument to Copernicus at his tomb in Frombork Cathedral.

Gingerich knows the triumphs and tribulations of Copernicus as well as anyone. In 2002 he completed his quest to find and inspect all known original copies of De Revolutionibus, more than 600 in all. Two years later he chronicled that decades-long obsession in The Book Nobody Read.

In his book, Gingerich also clarifies what Copernicus really saw while on his deathbed. "He must have been receiving batches of printed pages regularly so he could prepare the errata sheet," Gingerich explains. "What he got on his dying day were the final pages printed, that is, the front matter."

The ceremony in Frombork underscores how the Catholic church has sought rapprochement not only with Copernicus but also with other astronomers it once considered heretical: Galileo and (to a degree) the outspoken Giordano Bruno, who espoused an infinite universe filled with planetary systems like our own.

There were a lot of stories and articles about Copernicus last week in numerous newspapers across Poland including very interesting interview with O.Gingerich who totally investigated about 630 copies of De Revolutionibus - about 300 from first and about 330 from second print. A week ago there were a rare occasion to see one of them in our KÃ³rnik Regional Museum where a copy of the famous book has been displayed to the public (next time will be in uncertain future, but not earlier than in few years time as Museum's staff announced).

Well, isn't it nice that the church has finally emerged into the 16th Century, and finally acknowledged Copernicus!!!!

I highly recommend "The Book Nobody Read" by Owen Gingerich. What a wonderful chronicle of scientific detective-work.

Greetings to my atheist friends â

I'd like to suggest a new approach to resolving the lack-of-proof difficulty in the scientific denial of God. The proper procedure for the researcher who is sincerely interested in truth (and not just a polemicist), is the scientifically and historically respected method of self-experimentation (see references below).

Because the truth of God resides above the level of crude physical "proofs," and because He will not reveal Himself to a hardened heart, the experimenter seeking real proof must perform the experiment upon himself. Rejecting preconceptions and open to the possibility of unexpected results (consistent with good scientific method), the investigator simply follows the procedural instructions contained in the New Testament, in order to ascertain the reality of the biblical claims about God.

An insistence on an abstract approach to those claims will not do â in this case, because the object of research has (by definition) the prerogative to set the terms of the experiment. As with any experiment, a sincere researcher must pursue his or her results by methodology appropriate to the subject. Here, in investigating the question above all questions, if an approach with a long history of scientific legitimacy offers the possibility of success, we owe it to ourselves to direct our efforts accordingly. We have everything to gain, and nothing, really, nothing at all to lose.

Hmm, let's think about that legend about Copernicus not seeing a copy of De Revolutionibus until a few hours before his death. Is it lucky chance that after only a few hours, a strand of his hair turns up in a copy of that work? I think it more likely that the legend is false and that he had a copy of his work for some time - at least long enough to scratch his head over and trap that telltale strand of hair!

Scott, the hair came from a book belonging to him, like from his library. It wasn't found in a copy of De Revolutionibus. Right, Owen? Jerzy? Kelly?

It may be helpful to read the article again. It mentions that a hair was found in A book in Copernicus' library, not that it was found in a copy of HIS book... Copernicus, like any other academic of his and our age, probably had quite a few books in his library.

To confirm remains found as Copernicus' there were a little more than single DNA analysys performed. This famous hair was not only one source - some other family samples have been compared.

It is simplistic and simple-minded to say that the Catholic Church condemned Copericanism and, especially, Copernicus. Copernicus was never condemned, and he could have been, even after his death. He could have been declared a heretic, his remains exhumed, and then burned. Such things did happen, before his birth and after his death, so such could have certainly occurred with him, but it did not occur, and for a good reason, the Church never condemned Copernicus or his ideas.

Try as you may, you will not find a similar condemnation of Galileo. As we all know, Galileo could at times be an arrogant "big mouth," and the Church silenced him, and rightly so, given the civil structure of the time. If anything, house imprisonment allowed him to continue his work on mechanics, paving the way for Newton's accomplishments. As all churchmen at the time knew, the verdict against Galileo was completely reformable, as occurred at the Trial of Nullification of Saint Jehanne la Pucelle (aka, "Joan of Arc") two centuries earlier. Galileo's ideas, although correct, were controversial, and such controversies needed to be expressed in Latin and not the common vernacular. He got what he deserved.