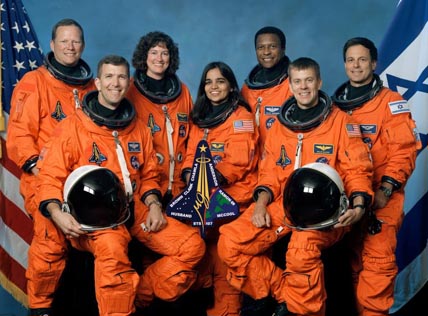 Last August 6th the International Astronomical Union's Minor Planet Center honored the seven crew members of the ill-fated Space Shuttle Columbia by naming minor planets after them. Columbia disintegrated while reentering Earth's atmosphere on February 1st, resulting in the loss of the shuttle and its crew.

The minor planets were discovered by former NASA Jet Propulsion Laboratory astronomer Eleanor F. Helin from Palomar Observatory on the nights of July 18–21, 2001, as part of the Near-Earth Asteroid Tracking (NEAT) survey. They orbit the Sun between Mars and Jupiter and range in size from 5 to 7 kilometers.

The Columbia crew aren't the only NASA casualties who have been honored with minor planets posthumously. The seven crew members of the Space Shuttle Challenger who died in 1986 each have their own asteroids, as well as Apollo 1 command pilot Virgil I. "Gus" Grissom (2161 Grissom). Yet no minor planets have been named so far for Grissom's two crewmates — Edward H. White II and Roger B. Chaffee — who also perished in the flash fire during Apollo 1's prelaunch test in 1967.