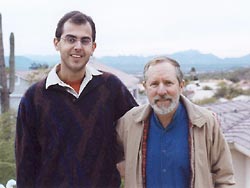 Five eagle-eyed individuals who were looking in the right place at the right time will share the fifth annual Edgar Wilson Award for amateur comet discovery. According to an announcement issued by the Smithsonian Astrophysical Observatory, the winners are Sebastian Hönig (Dossenheim, Germany) for discovering C/2002 O4; Tetuo Kudo (Kikuchi, Kumamoto, Japan) and Shigehisa Fujikawa (Mitoyo, Kagawa, Japan) for C/2002 X5; and Charles Juels (Fountain Hills, Arizona) and Paulo Holvorcem (Campinas, Brazil) for C/2002 Y1. All these discoveries were made during the calendar year ending June 11, 2003. 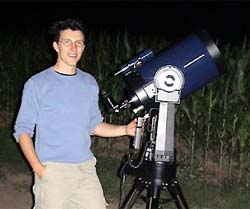 German amateur astronomer Sebastian Hönig was observing with this 10-inch Meade Schmidt-Cassegrain telescope when he stumbled upon Comet C/2002 O4.

Established in 1998 in memory of American businessman Edgar Wilson, the award is given only to amateur astronomers who, in a given year, find one or more new comets using amateur, privately owned equipment. It consists of a plaque and a cash prize to be determined by the award's trustee. (In 1999 the total prize was about $20,000.)

Hönig's discovery is the first visual amateur comet find from Germany since 1946. A physics and astronomy student at the University of Heidelberg, he accidentally found C/2002 O4 on July 22, 2002, while observing globular clusters in the constellation Pegasus with his 10-inch Schmidt-Cassegrain telescope.

Kudo is a widely recognized astrophotographer who began comet hunting a few years ago. On December 13, 2002, while waiting to complete an exposure, he scanned the sky with his Nikon 20 x 120 binoculars and chanced upon C/2002 X5. The following night the comet was independently picked up by Fujikawa using a 6-inch reflector. This was Fujikawa's sixth confirmed comet discovery.

C/2002 Y1 is the first comet find for both Juels and Holvorcem. It was found on December 28, 2002 — the first light for the 5-inch f/5 refractor with a 2.3°-by-2.3°-field CCD camera that Juels had put together to search for near-Earth objects. The two were collaborating on this observing project via a high-speed Internet connection, which allowed them to transfer and analyze images in near real-time. 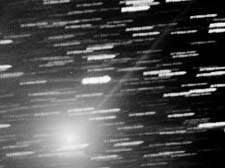 A retired physician, Juels is one of the world's top amateur minor-planet discoverers, with 209 numbered asteroids to his credit. Holvorcem, on the other hand, currently develops software for automated observatories such as Tenagra Observatories. To date, he has discovered or codiscovered 22 numbered asteroids and several supernovae. In addition, Juels and Holvorcem are jointly credited with finding 41 numbered asteroids, including a potentially hazardous 1-kilometer-wide Apollo asteroid, 2002 UQ3.

More details about the Edgar Wilson Award are available from the Central Bureau for Astronomical Telegrams.