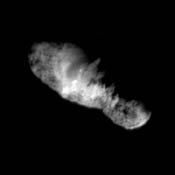 Deep Space 1 took this picture of Comet Borrelly's nucleus from 3,400 kilometers away. Astronomers now believe that Borrelly is the darkest object ever seen in the solar system.

In the two months since NASA’s Deep
Space 1 craft zipped past the nucleus of Comet 15P/Borrelly, mission
scientists have come to appreciate how unusual this 8-kilometer-long
chunk of rock and ice really is. Today the team presented more preliminary
results at the annual meeting of American Astronomical Society's Division
for Planetary Sciences in New Orleans.

One finding, not unexpected, is that Borrelly's nucleus
is as dark as the black hearts of comets Halley and Neujmin 1. The overall
reflectivity (albedo) is about 3 percent — comparable to the powdered
toner used in laser printers and photocopiers. What did catch
the team off guard, however, was spotting some small patches so black
that they reflect only 0.7 percent of the sunlight that strikes them.
According to Bonnie J. Burratti (Jet Propulsion Laboratory), only one
other surface in the solar system — the dark hemisphere of Saturn's
moon Iapetus — is comparably dark.

Deep Space 1's best images record features only 48 meters
across, detailed enough to allow geologists to discern two distinct
types of terrain. Each end of the comet's core looks rough and pitted,
while its smoother-looking midsection contains several dark-topped "mesas"
slightly higher than their surroundings. The nucleus also has a distinct
kink near its middle that is crisscrossed by fractures. To geologist
Daniel T. Britt (University of Tennessee), this "crush zone" appears
to mark the point of flexure between two large halves of the nucleus.

Because Borrelly produces only a tenth of the dust that
Halley does, the spacecraft had an unobstructed view of the nucleus
and of the striking jets erupting from it toward the Sun. Larry Soderblom
(U.S. Geological Survey) reports that at least three jet systems were
active during the September 22nd flyby, the strongest of which probably
lies very close to the comet's rotational axis. Contrary to expectations,
Soderblom says, the jets don't originate in the smooth-looking midsection
but instead seem to emanate from around its periphery.

Planetary geochemists still have no idea what is making
the nucleus look so black. "This low albedo poses a severe constraint
on determining the composition of the nucleus," confides project scientist
Robert M. Nelson (Jet Propulsion Laboratory). Still, the craft's 41
infrared scans should provide some clues to the black stuff's makeup
— even though the only distinct spectral fingerprint, an absorption
at 2.4 microns, has no known mineralogical match. Some help may come
from assays of gas made as Deep Space 1 raced through the coma at more
than 16 km per second. 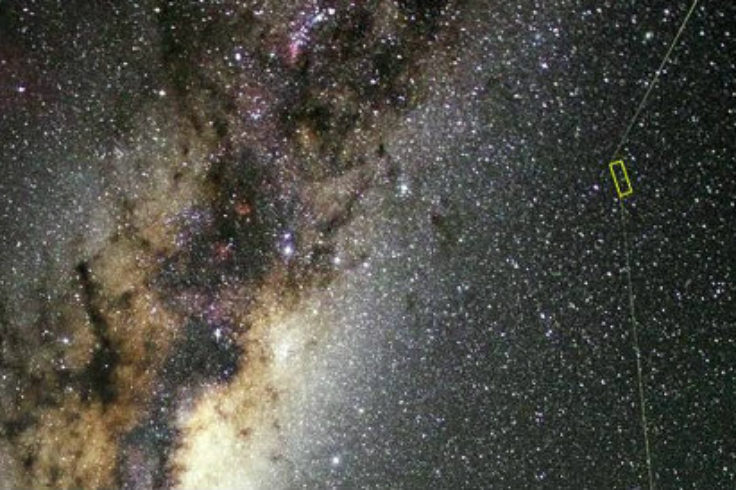