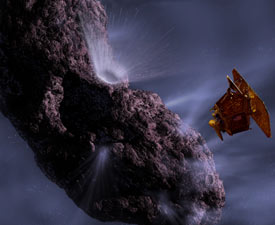 Deep Impact will rendezvous with Comet Tempel 1 on July 4, 2005.

NASA announced last March 25th that Deep Impact, which is en route for a July 4th encounter with Comet Tempel 1, is experiencing a technical glitch that is preventing the flyby spacecraft's primary camera from reaching perfect focus.

Called the High Resolution Instrument (HRI), the camera features a 0.3-meter (11.8-inch) f/35 Cassegrain telescope with a 1,024-by-1,024-pixel CCD detector and an infrared spectrometer. The HRI is designed to resolve features on Tempel 1's nucleus down to 1.4 meters per pixel at 700 kilometers. It is also intended to capture the crater excavated by the spacecraft's impactor when it slams into the nucleus at high speed. Scientists hope that the collision will provide clues as to the comet's internal structure and composition.

Mission controllers discovered the HRI's focusing problem soon after "bake-out," a routine heating of the camera's optical tube assembly to evaporate any moisture that may have been absorbed by the system during the spacecraft's launch last January. More tests are needed to determine what corrective measures, if any, can be taken. In the meantime, the spectrometer as well as the smaller backup cameras onboard the flyby spacecraft and the impactor itself are all operating as planned.

"Even if the spatial resolution of the [HRI] remains at present levels," notes Michael F. A'Hearn (University of Maryland), the principal investigator for Deep Impact, "we still expect to obtain the best, most detailed pictures of a comet nucleus ever taken." He believes that the resolution should be "recoverable after the fact," using the deconvolution image-processing technique.