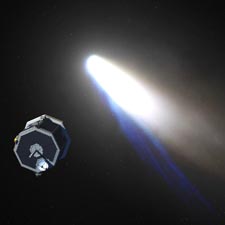 The Contour spacecraft (seen here in an artist depiction) will encounter at least two comets during its lifetime — assuming engineers can reestablish contact with it.

At 4:49 a.m. Eastern Daylight Time, the Contour spacecraft was to fire its engine, leave its Earth orbit, and head off into interplanetary space. When the burn took place, the craft was 225 kilometers (140 miles) above the Indian Ocean, in a blind spot from communications. Deep-Space Network tracking stations in either Goldstone, California, or Canberra, Australia, were supposed to reestablish contact with the spacecraft 46 minutes later. But all attempts to reach the craft went unanswered.

Currently engineers at the Applied Physics Laboratory control center are troubleshooting what might have gone wrong. While it is unclear whether the burn actually took place, they are assuming for now that it did. As of this afternoon communications had not yet been established.

NASA has turned to amateur astronomers for help locating the craft. Since its launch on July 3rd, many advanced amateurs with the capability to observe the faintest asteroids have also watched and imaged Contour orbiting Earth. Even if Contour's burn was successful, it should still be around 18th magnitude — within the capabilities of amateurs with large telescopes and CCD cameras.

Contour (a contraction for Comet Nucleus Tour) is scheduled to meet with Comet 2P/Encke in November 2003 and Comet 73P/Schwassmann-Wachmann 3 in June 2006. A third comet — 6P/d'Arrest — is a possible target for 2008. Additionally NASA planners designed the mission so that it would be flexible enough to intercept an unexpected cometary visitor passing through the inner solar system.

The craft features a spectrometer to analyze the chemical composition of the comets as well as two high-resolution cameras. This is NASA's sixth Discovery mission. Its total cost is $159 million.