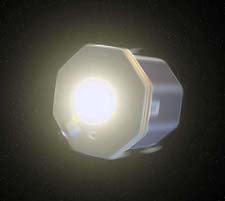 A depiction of the Contour spacecraft firing its STAR-30 rocket on August 15, 2002. The 50-second-long burn pushed the craft out of Earth orbit and into interplanetary space.

Although efforts to reestablish contact with the Contour spacecraft continue, mission managers now suspect that the craft was destroyed during a rocket firing on August 15th. Convincing evidence came from images acquired by the Spacewatch telescope about 20 hours afterward, showing two objects separated in the sky by about 460 kilometers and located some 460,000 km from Earth.

"This is not the best evening for the Contour mission," reported mission mananger Robert W. Farquhar during a telephone press conference yesterday. "The news today is very discouraging." A 50-second-long burn, which occurred at 4:49 a.m. Eastern Daylight Time on August 15th, was supposed to push Contour out of Earth orbit and onto a trajectory to intercept periodic comet 2P/Encke. The firing occurred over the Indian Ocean, with the craft out of touch with ground controllers. Radio contact could not be reestablished afterward. 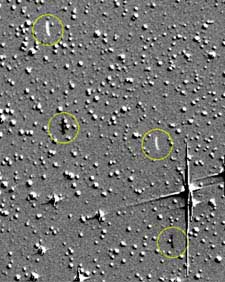 Two objects (trailed pairs of streaks within the circles) may be what's now left of the Contour spacecraft. The trails remained when images taken 21 minutes apart on August 16, 2002, were subtracted from one another; the white trails registered at 4:17 Universal time, the black ones at 4:38 UT. James Scotti recorded this with the 1.8-meter Spacewatch telescope.

Farquahar and his team received the Spacewatch image in response to a call to professional and amateur astronomers to help locate the spacecraft. The image shows a pair of 18th-magnitude objects, one approximately three times brighter than the other. According to David W. Dunham, head of the mission-design team, the objects were then within 0.6° of where Contour would have been if on its correct interplanetary trajectory, and their positions suggest that Contour's solid-fuel STAR-30 rocket motor provided about 3 percent less total thrust than expected. Dunham estimates that "Contour A" and "Contour B" are moving apart at roughly 6 meters per second (14 miles per hour). It is not yet clear what the two pieces might be. "The spacecraft was built around the STAR motor," Dunham notes, "and they weren't supposed to separate."

Astronomers atop Mauna Kea also aided the search effort, and by the morning of the 17th (Universal Time) the two objects had been spotted by a University of Hawaii team using a 2.2-meter reflector. When seen again one day later, A and B were 1.6 million km from Earth, had drifted at least 1,500 km apart, and had dimmed to magnitude 20.5 and 21.4, respectively. 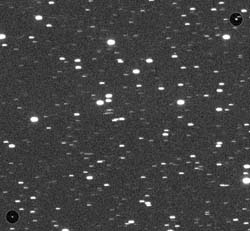 The two Contour objects (circled) were captured coasting through Vulpecula on August 18th. Yan Fernandez and Henry Hsieh acquired this 60-second exposure at 9:03 Universal Time using the University of Hawaii's 2.2-meter reflector on Mauna Kea. The field is about 2.5 arcminutes wide.

The mission team, which operates from Johns Hopkins University's Applied Physics Laboratory in Maryland, has been working with NASA's Deep Space Network and other agencies to pick up radio transmissions from the spacecraft. The powerful Arecibo telescope in Puerto Rico attempted to detect Contour — or what might be left of it — using radar on the nights of the 15th and 16th, without success. "Contour is now too far away for us," comments Arecibo observer Michael C. Nolan. "It's only 2 meters across, and its design is fairly radar-stealthy."

On Monday mission operators will see if the spacecraft carries out a built-in command to transmit through all four of its antennas, a sequence that is triggered automatically 96 hours after receiving its last command. "I haven't given up," says the usually optimistic Farquhar, but even he now admits that the prospects for recovery are "pretty bleak."

Contour, a contraction for Comet Nucleus Tour, was designed to explore two very different comets: relatively weak 2P/Encke and lively 73P/Schwassmann-Wachmann 3. Many of the team's scientists and engineers served on APL's last interplanetary mission, the Near-Earth Asteroid Rendezvous, which successfully explored — and landed on — 433 Eros in 2000–01. Notably, NEAR also experienced a mission-threatening problem during a rocket firing. However, in that case the engine was powered by liquid fuel and could be restarted; no such option exists for Contour.