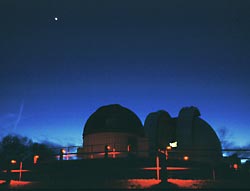 Thanks to some diplomatic efforts by amateur astronomers, the skies above George Observatory, outside Houston, Texas, may be saved from additional light pollution.

In the ongoing struggle between expanding development and the protection of vanishing dark skies, it looks like there's a success story in the making outside Houston — and possibly an example for other areas facing similar threats.

The George Observatory, run by the Houston Museum of Natural Science and located about 50 miles from the city, draws about 30,000 visitors every year for school field trips, public observing sessions, and an active research program by students and amateur astronomers using its 36-inch reflector. The site is close enough to the city to serve a large number of visitors, explains observatory director Betty Glass, but far enough away to have reasonably dark skies — though that is changing fast as the city expands.

But a bigger danger than the gradual sprawl of development appeared to be looming this summer: An unidentified developer is planning to build a large new NASCAR auto racetrack less than 15 miles away, with the potential for bright lights on the Friday and Saturday evenings when most visitors use the observatory.

Alerted by a call from Sky & Telescope, the local Fort Bend Astronomy Club and its dark-sky committee sprang into action. After determining that Morris Architects in Houston was handling the racetrack plans, Glass contacted the architect there who is designing the project.

As luck would have it, the architect had visited the George Observatory himself and was eager to cooperate to minimize the racetrack's impact on the skies. "The developer wants to be a good neighbor," Glass says. "He said they would definitely consider shielded lighting." The architect suggested the group contact them in December, when the project should be getting to the stage of lighting design. Though the exact location has not been made public, the architect confirmed its proximity to the observatory.

As presently planned, Glass says, "there will be only a few events a year where they would have big lights." Glass says she will urge the racetrack to turn off those lights as soon as possible after events end.

Jack McKaye, vice-president of the Fort Bend club, feels that this whole episode has helped to revitalize the group's efforts to combat light pollution after several failed attempts to work with poorly lit shopping centers. "It's been a long row to hoe," he says, "just trying to get people to believe that they're saving money and being responsible by shining their lights on the ground."

The group has had some previous success, last year getting the route changed for a new parkway near the observatory, and getting a nearby McDonald's to shield its lights, McKaye says. But, "after getting slapped down as regularly as we had," the initial promising response on this new project "kind of rejuvenated a lot of people."

Before she talked to the architect, "I was out looking at the Milky Way, and I was thinking, I hope it's here next summer," Glass says. If the racetrack developers are really as cooperative as they seem so far, it looks like that's a good bet.