Astronomers discover an unexpected new feature on the Sun, leading to further insights about the Sun’s magnetic field.

With the eyes of seven space probes currently trained on the Sun, you might think all the Sun’s mysteries would be solved by now. Far from it; the Sun becomes ever more complicated the closer you look. For instance, when Neil Sheeley (Naval Research Laboratory) sorted through images sent down to Earth from NASA’s Solar Dynamics Observatory last autumn, he found a whole new type of feature. High in the Sun’s super-hot atmosphere — the corona — was a pattern of bright cells with dark boundaries. 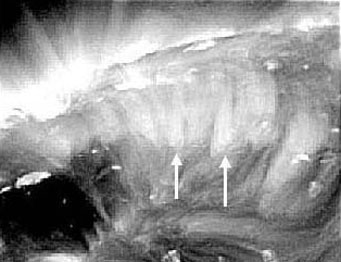 Coronal cells take on a different appearance when viewed from the side by STEREO-B. The giant plumes of gas look "like candles on a birthday cake," says Sheeley. The arrows point to individual cells/plumes.

These “coronal cells” look similar to granules, the pattern of convection cells covering the Sun’s visible surface like bubbles in a boiling pot of water. But the new features occur millions of miles above the Sun’s visible surface, where no convection can be happening. And while surface granules show the strongest magnetic fields at their boundaries, coronal cells carry the strongest fields in their centers.

Sheeley and his coauthor Harry Warren (Naval Research Laboratory) used all the tools at their disposal to follow up on the discovery, observing the coronal cells using instruments not just on SDO but also on the Hinode, STEREO, and SOHO solar observatories. By following the cells as solar rotation carried them across the Sun’s face (see the video below), Sheeley and Warren discovered that the features only appear cell-like when viewed from above. Viewed from the side, they are plumes of gas extending up from the surface, “like candles on a birthday cake,” explains Sheeley in a NASA press release.

Watch coronal cells as solar rotation carries them across the face of the Sun in this time-lapse video: