With the death of this gifted but contentious astronomer on December 28th, a controversial ideology concerning redshifts and the expansion of the universe has come to a quiet end. 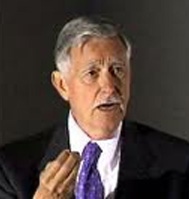 During his tenure at the Hale Observatories in California, Halton C. Arp became convinced that the redshifts exhibited by distant galaxies weren't necessarily due to their rapid motion away from us.

A half century ago, astronomers affiliated with Hale Observatories in California were recognized as accomplished, respected members of the community. Halton C. Arp was one such researcher. A staff astronomer at the esteemed institution for 29 years, he excelled as an observer and had frequent access to the 5-m Hale Telescope on Palomar Mountain.

Yet beginning in the mid-1960s, Arp became convinced that the spectral redshifts of all distant galaxies, indicating their rapid movement away from us and thus showing that the universe is expanding, were not what they seemed. He identified many tantalizing pairings, such as galaxies and quasars apparently intertwined in space, with seriously mismatched redshifts. To him, this meant that we just didn't understand redshifts. Others dismissed the couplings as optical illusions or chance alignments.

But "Chip" Arp, a champion fencer in his youth, remained stubbornly convinced. The "redshift debate" heated up in 1966, when he published a compendium of 338 such cosmic oddities in his Atlas of Peculiar Galaxies. Six years later, on December 30, 1972, Arp squared off in an extraordinary live debate with Princeton cosmologist John Bachall, and their extended back-and-forth salvos became the basis of a book, The Redshift Controversy, published the next year. 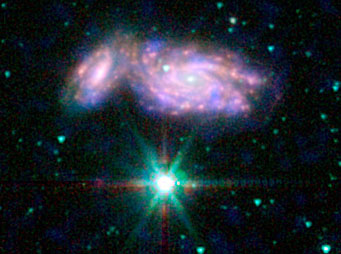 NGC 935 and its companion IC 1801, a pair of spiral galaxies that are beginning to crash into each other. Here ultraviolet emission from young stars is coded blue, mid-infrared emission from hot dust is in red, and near-infrared stellar emission in green.

With time, as evidence mounted supporting the Big Bang, Arp's contention was seen as less and less credible. Eventually he was no longer allotted observing time on the world's big telescopes, and he retired from the Hale staff to join the Max Planck Institute for Astrophysics near Munich, Germany. It's in Munich that he died, at age 86, on December 28th.

For more details about Arp's career and his controversial ideas, check out Dennis Overbye's detailed obituary for the New York Times.

In Dr. Arp's obituary in the New York times, the writer says: "In the expanding universe, as discovered by Edwin Hubble in 1929, everything is moving away from us. The farther away it is, the faster it is going, as revealed by its redshift, a stretching of light waves — like the changing tone of an ambulance siren as it goes past — known as a Doppler shift." Really? Previous to some of the work that culminated in the 2011 Nobel award, the brightness of type 1a supernovae at relatively closer distances than those of later Nobel observations were too dim to support Hubble’s ‘red shift’/speed correlation. (Too dim implies they would be further away than a ‘red shift’ speed correlation would predict.) Some predicted that some kind of dust or material in space, between us and the star, possibly surrounding the star, made the starlight dimmer. Then Adam Reiss, one of the Nobel recipients, found a supernovae at far distance, i.e. a lot of ‘red shift’, that was too bright for the ‘red shift’/speed correlation (it should have been dimmer if farther away, given larger ‘red shift’), but this was one item. Then by 2003 he had found at least 10 too bright. This eliminated the “dust” explanation, and the ‘red shift’/speed correlation was falling apart.
https://www.facebook.com/notes/reid-barnes/are-we-ready-for-a-galaxy-formation-paradigm-shiftupdated/462435587142354

Chip Arp was one of the finest men and scientists I ever. met. He believed that observation trumped theory, a lesson many of his peers never learned. The author states that a controversial "ideology" has come to a quiet end. As long as there are scientists willing to look at data and think, Arp's theories will be alive.
If one is interested in his work, I suggest Seeing Red, Apeiron Press.

I had the privilege of meeting Dr. Arp and sitting in on a conversation between him and several other astronomers, all far more accomplished and knowledgable than me. It was fascinating and is a memory I will always cherish. Dr. Arp talked about the experience of sitting in the observing cage at Palomar, where he estimated he spent a year of actual time. He also talked about the experience of being estranged from the American astronomical community and how sadly childish even brilliant scientists can be. At its core, the debate about redshift with which Dr. Arp is associated is not about ideology, it is about observations, and the courage to stand by those observations even when they don't fit currently accepted theories. Dr. Arp's observations are real and I believe he, along with Hoyle, Burbridge, and others, will be vindicated. If nothing else he gave amateur deep-sky observers a terrific list of challenging targets. Rest in peace, Halton Arp.

He always made a good point about his controversial theory on redshifts whether you agree with him or not. Big Bang theory has been elevated to a degree of religious faith rather than being disputed in a scientific way the way it should, and he challenged that status. By doing that he was simply outcasted by his peers, prevented from having telescope time and his articles subjected to a kind of censorship, seldom seen in the scientific community.
This is not the way science should be done and to be honest, somehow, it reminds us the way it was in Galileu time.
I hope is memory will be long lasting in future generations of astronomers, more open minded.

This was a very interesting article to read, and it is encouraging to see respect and attention paid to an eminent scientist, especially one such as Dr. Arp who dared to go against the mainstream. I believe it is admirable and rare to be willing to risk one's professional reputation (let alone grant money) to stand up for a sincerely-held minority opinion.

However, I think it is unfair to characterize the Big Bang theory as a religious belief. There is considerable evidence in favor of this model other than extra-galactic redshifts increasing with distance. For one, the cosmic microwave background matches the power-versus-wavelength profile of a black body radiator (2.7 kelvins); this fact alone caused most astrophysicists to abandon the Steady State theory decades ago. As another, the Big Bang model makes specific predictions about the relative abundances of hydrogen, helium, and lithium that are corroborated by observed spectral absorption lines in interstellar gas.

Hopefully in the modern era, scientists describe the Big Bang idea (or any scientific theory) as a model, not an indisputable fact. It may be revised some day, or even replaced, when some future observations give us more data. But there are good reasons why most scientists regard the Big Bang model as the best explanation we currently have.