NASA's newest rover has shown that its landing site inside Gale crater bears rich evidence that liquid water once flowed across the Martian surface.

Yesterday scientists for NASA's Mars Science Laboratory, a.k.a. Curiosity, announced that the rover has encountered a striking rock outcrop jutting from the dusty terrain along its route. "It looks like someone came along on the surface with a jackhammer and lifted up a sidewalk at a construction site," comments project scientist John Grotzinger. 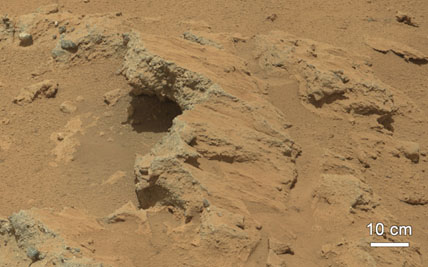 NASA's Curiosity rover found evidence for an ancient, flowing stream on Mars at the rock outcrop pictured here, which the science team has named for Hottah Lake in Canada's Northwest Territories. The Hottah outcrop has rounded pieces of gravel embedded in it, indicating that they were transported by a vigorous flow of water. Click on the image for a larger version.

The rover reached this rocky outcrop, nicknamed Hottah, about two weeks ago. When the team took close-up images of the exposed rock, using the rover's mast-mounted camera equipped with a 100-mm-focal-length lens, it became clear that it's a layer of loosely cemented gravel and sand, strikingly similar to geologic features common in dry stream beds on Earth. Moreover, Hottah looks much like a second outcrop, called Link, spotted earlier in its trek and also like the crusty material exposed by rocket exhaust during the landing.

The Curiosity team believes that the the mix of material at all three locations was deposited by a flowing stream in the distant past. "The rounded gravel tells us the particles have been transported by water or wind, wears away the edges to yield a smooth surface," explains investigator Rebecca Williams (Planetary Science Institute. However, she continues, "These are too large to be transported by wind, so we think they were transported by water in a vigorous stream." 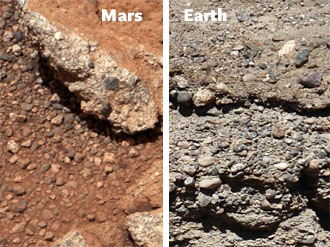 Compare Curiosity's image of the outcrop called Link (left) with a typical sedimentary conglomerate formed by gravel fragments in a stream on Earth (right). The larges pebbles are about 1 inch (2½ cm) across.

"From the size of gravels it carried," says William Dietrich (University of California, Berkeley), "the water was moving about 3 feet per second, with a depth somewhere between ankle and hip deep."

It's an important scientific find, though not an unexpected one. MSL scientists chose to drop Curiosity onto the floor of Gale crater, in part, because nearby is an extensive fan-shaped deposit at the end of a long channel, named Peace Vallis, that runs downslope from the crater's inner wall. This fan of sediment, built up by a long-duration succession of flows down a half-mile-long channel, apparently extends to the rover's landing site.

To get the details of this important find — the first of what will likely be many during Curiosity's two-year mission — head to the NASA press release.

It's very satisfying to read that MSL Curiosity is finding clear evidence to support planetary scientists' understanding of Martian geological history. And the pictures are really nice! Curiosity's pictures are making me look at humble terrestrial features, like dry stream beds, with new interest and appreciation.

My observation - Mount St. Helens shows sediment layers can form abruptly. Did these sediment layers form from an impact that contained water which then flowed briefly over the area? How long could the water flow and remain liquid before evaporating completely?

Rod: good point, but in this case there's a clear source for the deposit: a long, deep channel that drains into the landing area from Gale's inner wall. I've added a link in the story to a map showing it.

This Martian gravel formation reminds me of terrain I’ve driven across in the back country of Big Bend National Park in west Texas. What I’ve seen in the earthly case was rounded gravels covering large areas of relatively flat land several miles from the base of alluvial fans surrounding the steeper slopes of desert mountains. They refer to it in trail guides as “desert pavement” in fact. Thanks for adding the Peace Vallis photo reference Kelly. If this whole area of Gale crater contains this layer of gravelly conglomerate it would imply that this stream or more than likely braided streams meandered widely over this part of the crater floor for a considerable time. Then it was covered by a thin layer of other sediment, some of which remained undisturbed until Curiosity landed. My question is what caused the outcropping in the main photo in the article to be tilted and exposed? Is it perhaps the rim of a small impact crater, or was this outcropping formed from some other geological process?

Bruce et al. I find reports like this presenting evidence of large quantities of flowing water on Mars surface, difficult to reconcile with the Faint Young Sun Paradox. Mars would be even colder than it is today so maintaining liquid water seems contradictory when evaluated against the Faint Young Sun. We know the atmosphere on Mars today is extremely thin, some 5-10 millibars compared to standard atmosphere on earth of 1013 millibars. Liquid water does not exist long in a thin atmosphere, it will quickly evaporate. The solar energy problem I mentioned also indicates water will freeze rapidly too on Mars surface or deeper inside. Just how long the water and streambed flowed I did not see in the report or links provided or how this flowing water could be sustained with the problems I have mentioned. Perhaps catastrophic water flows?

I just checked on "The Faint Young Sun Paradox" in Wikipedia, but still do not understand why heat from Earth's/ Mars' cores and/ or respective volcanic activities could not contribute to keeping water fluid?

Rod, three points off the top. (1) In general, water (although mostly frozen) is more common in the solar system the farther out from the sun. So if the Martian atmosphere formed along the same lines as it did upon the Earth Mars could be suspected to have had a significant amount of H2O in the past. It could still have in fact beneath the surface. (2) The mass of Mars is only 10.7447% that of earth, and as you point out the atmosphere is very thin now. I think it is very likely that in the distant past Mars had a much thicker atmosphere, with large quantities of H20 and C20, both potent greenhouse gasses. (3) Mars lacks a strong magnetic field, so there is no shield against the sun’s effects upon it’s atmosphere as there is here on Earth. Therefore the solar wind and radiation constantly eat away at the weakly (gravitationally) held atmosphere. So summing these facts up I would think that a great deal of water could have existed and even flowed and pooled and even formed oceans in the distant past. Even if the sun was weaker in the distant past, greenhouse effect could have compensated, or maybe the sun wasn’t as faint as some think. In any case, as Curiosity keeps trucking along the evidence for waters may deepen, as it were. We shall see.

Bruce et al. I point this observation out - "The faint young Sun presents us with a paradox because the predicted temperatures on Earth and Mars would have been too cold for liquid water," explains Steinn Sigurdsson of Penn State University. Too cold for liquid water? Not likely. Evidence in the oldest rocks suggests that Earth had liquid oceans as far back as 4.4 billion years ago. On Mars, scientists have built up a case that it too was warm and wet around 4 billion years ago. To avoid the so-called "faint young Sun paradox," scientists over the past 25 years have explored taking the Sun off the "standard" evolution curve. By starting off with a smidgen more mass, the early Sun would be bright enough to maintain liquid water temperatures on Earth and Mars. The catch is that the Sun would need to have had an extremely high solar wind to blow off the excess mass and return it to its "normal weight..."There's no greenhouse solution for Mars," Sigurdsson says. "But geochemists may not be ready to give it up.
The winds of change -The lack of a clear climate resolution to the paradox leaves the door open for tweaking the initial mass of the Sun. Previous work has found that this "open door" is really just a "small window," i.e., the increase in solar mass has to be somewhere between 2 and 5 percent. Any less, and the Earth won't warm up enough. Any more, and the Sun evolves into a different star than we know it to be. Sigurdsson's team is exploring this mass range using a new stellar evolution computer model, called MESA, that is more sophisticated than previous ones...."
Ref - Baby Fat" on the Young Sun?, http://www.spacedaily.com/reports/Baby_Fat_on_the_Young_Sun_999.html (accessed Feb/12)

We see that Mars with a green house atmosphere does not solve this problem. Something is wrong at Mars 🙂

... so is heat from the inner core to weak to be player in this game? Around 4 billion years ago, on either Mars or Earth?

... and the impact on Earth of a Mars-sized body to end up building up our Moon around 4.5 billion years ago? This also must have generated and left an enormous amount of heat and energy. Similar events are conceivable on Mars with Phobos and/ or Deimos, are they? 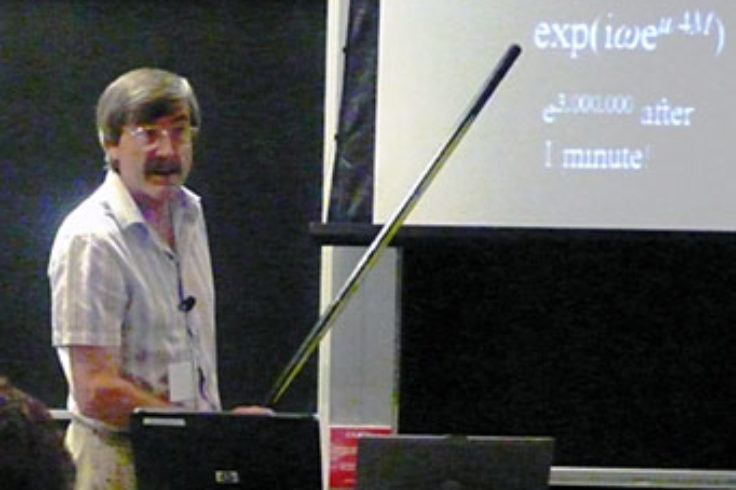