The mission team cheered wildly after Curiosity, the largest and most sophisticated interplanetary lander ever built, descended through the thin Martian atmosphere and made a successful, pinpoint touchdown inside Gale crater.

In the hours leading up to the arrival of Curiosity rover on Mars, the mood at NASA's Jet Propulsion Laboratory in Pasadena, California, was upbeat but understandably tense. Engineers had tested and retested every phase of the complex atmospheric entry, descent, and landing (EDL) — a perilous "seven minutes of terror" during which the spacecraft would slow from 13,200 miles per hour (nearly 6 km per second) to a dead stop.

Although optimistic — they believed the chance of success to be better than 95% — the team had nonetheless steeled itself for the possibility that something might go wrong. Would Curiosity "fly" itself to a small landing zone on the floor of Gale crater? Would the parachute deploy on time? Would the untested, rocket-assisted landing scheme work as designed?

History has shown that landing on Mars isn't easy. Glimpse back in time with our FREE ebook, Mars Landings: Past & Present, and find out why so many landings went awry. 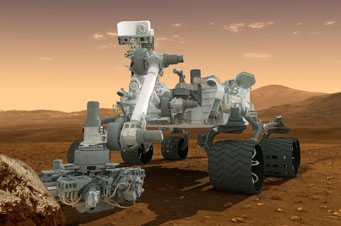 An artist's concept of NASA's Curiosity rover, a mobile robotic laboratory for investigating Mars' past or present ability to sustain microbial life.

The landing involved four distinct phases. Curiosity remained inside its streamlined, protective aeroshell when it first slammed into the top of Mars's thin atmosphere, about 78 miles (125 km) up. This part of the ride was abrupt and rough: the capsule's exterior reached an estimated 3800°F (2100°C) and 10 or 11 g of deceleration. Onboard sensors controlled the descent's trajectory with rapid-fire rocket bursts, essentially steering it with a precision never before attempted. This crucial innovation reduced the size of the ellipse-shaped target zone to just 12 by 4 miles (20 by 7 km), small enough to fit on the flat floor inside Gale.

Once the speed dropped to about 900 mph, at an altitude of about 7 miles (11 km), the largest parachute ever sent to another planet unfurled at supersonic speeds and slowed the descent further. Then the bottom of the aeroshell dropped away, exposing the Mars Descent Imager (MARDI) that snapped four high-definition frames per second from an altitude of roughly 1.2 miles (2 km) until touchdown. 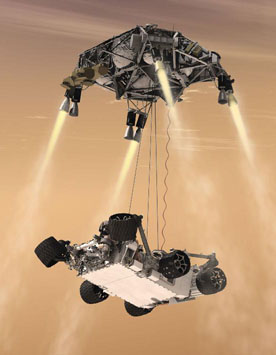 This artist's concept shows the "sky-crane" maneuver during the descent of NASA's Curiosity rover to the Martian surface.

The most anticipated — and anxious — portion of the descent occurred about a mile up, when the parachute and the remaining half of the heat shield were discarded. That's when the eight engines of the rover's "rocket backpack" fired up, slowing the descent further. On-board radar gauged the remaining distance to the surface, throttling the engines accordingly. But the mission's designers realized that the engines' exhaust would raise a large cloud of dust if they burned all the way to the surface. So about 70 feet (20 m) from touchdown, the rover was lowered on a trio of nylon cables. Once the wheels touched the ground, the cables were severed. This let the rocket stage veer off to the side so it could crash a safe distance away.

Four low-resolution snapshots were quickly radioed to Earth in the first minutes after touchdown, but don't expect to be wowed by dramatic vistas right away. The first 360° color panorama of the landing site won't reach Earth until Tuesday at the earliest, once mission controllers command Curiosity to raise its camera-topped mast. Also in the transmission queue are the first bird's-eye-view images taken by a camera on the craft's underside as it descended through the final 1¼ miles (2 km) of atmosphere.

In fact, it will be at least a week before Curiosity sets its six 20-inch-diameter wheels in motion. The time between now and then will be full of system checks and confirmation that its 10 experiments are ready to undertake the most exhaustive analysis of the Martian surface to date. Measuring 9.8 feet (3 m) long and nearly as wide, the spacecraft is roughly the size of a Mini Cooper and has a mass of nearly 1 ton. In fact, Curiosity's science payload alone — 165 pounds (75 kg) — is nearly half the mass of the entire rover Opportunity.

The first views radioed by Curiosity from its landing site within Gale crater were taken by hazard-avoidance cameras on the front of the spacecraft (at left, showing its shadow) and on the rear, showing one if its wheels (lower-right corner).

The $2½ billion Mars Science Laboratory mission has a lot of work ahead of it, expected to last at least a full Martian year (98 weeks). "This will be not a sprint but a marathon," notes Doug McCuistion, who directs NASA's Mars-exploration program. The main objective is to scale the slopes of the massive 3-mile-high mountain inside Gale. Named Aeolis Mons, it's actually a stack of sediments that, scientists hope, represent hundreds of millions of years of Martian history.

Just as the Grand Canyon in Arizona exposes ancient strata at the base of its walls and younger ones higher up, it's hoped that the lowest layers within Aeolis Mons were laid down more than 3 billion years ago, when geologists suspect that the climate was warm enough to permit liquid water to flow abundantly across the surface. 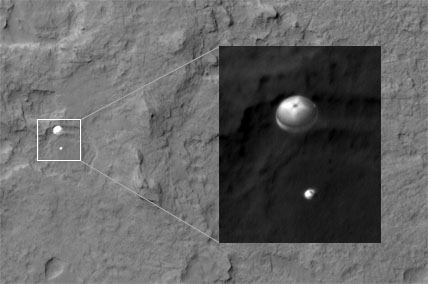 The HiRISE camera on NASAâ€™s Mars Reconnaissance Orbiter snapped this view of Curiosity rover (still in its protective aeroshell) and its parachute about 1 minute before they reached the Martian surface. At the time the orbiter was about 200 miles (324 km) away.

Were these climatic conditions conducive to life? That's what Curiosity — part geologist and part chemist — hopes to learn. Its instruments will study the geology along its uphill route with cameras, spectrometers, and other instruments that will study the character and composition of its rocks — even revealing crystal structure for the first time. Moreover, it will determine isotopic ratios of carbon and oxygen of ground-up rock samples, looking for any hint of organic matter that might exist in the planet's harsh environment. One especially novel experiment, called ChemCam, will vaporize tiny spots on rocks up to 20 feet (7 m) away and record the spectrum (at ultraviolet, visible, and infrared wavelengths) of the brief incandescent burst of light.

The only spacecraft to have searched specifically for Martian life were the twin Viking landers, which touched down in 1976. While Curiosity will not look specifically for life, it certainly represents a new tack in NASA's exploration strategy: to follow not only the water, but also the carbon, that might exist on the Red Planet.

Congratulations to the NASA crew in Pasadena (http://www.nasa.gov/mission_pages/msl/index.html)for great coverage of the successful landing last evening. It's a little disappointing that our local paper, the San Jose Mercury News (usually noted for its excellent coverage of high tech events), only mentioned this high risk, high reward success story on page four. Public enthusiasm is what fuels these missions.

Congrats all around to everyone involved! Kelly, thanks for providing the link to “seven minutes of terror” which no one should miss. Kelly or anyone else who might know, just how closely did the controllers hit the bull’s eye, that is how close to the center of the 12 by 4 mile target zone ellipse did Curiosity land?

According to spaceflight101.com, Curiosity landed two kilometers east and a few hundred kilometers north of the center of the target ellipse, well within the 20 x 7 km target. Dang, that's good.

Thanks Anthony. That sounds like the landing was about only about l.5 miles from the exact center of the target zone. Pretty good shootin' from 350 million miles away I'd say.

Wow Rod, that’s an interesting, challenging, and a timely question to those of us who believe in creation. I agree with you that the main goal of astrobiology seems to be to support the evolutionary, chance origin of life theory. While I share Jaimje’s above opinion that life won’t be found on Mars, I’m not going to put faith, as it were, in that opinion. After all, life in extreme forms has now been found in many harsh locations here on earth, so we shouldn’t be dogmatic and say that life on other worlds like Mars is impossible simply because the Bible is silent on the subject. To your core question I’d answer no, detection of present or past life on Mars wouldn’t confirm evolution, although you and I both know that it would be widely touted as such. Were life to be found on Mars I’d reason like this: God’s foremost quality is love, for as First John 4:8 says, “God is love.” Love for life was God’s motivation for bringing all kinds of living things into existence. Therefore the discovery of life elsewhere, should it occur, will not be near as faith shattering as some of today’s faithless may wish. If someone were to ask you like questions how would you respond Rod?

Bruce et al. I would simply ask how did life originate to begin with? Is the First Cause for the origin of life spontaneous generation or creation? Bruce the reverse of this questioning leads to another. How many negative tests for life on Mars is needed before secular science declares the idea falsified? The same applies to holding the view that time, chance, and random particle collisions created life on earth. Can this view of the origin of life ever be falsified by the scientific method?

Just read Fredric Taylor’s The Scientific Exploration of Mars (2010). Life is far more likely to be found on Europa, but it is far cheaper to look for it on Mars. Even so, finding definitive evidence of life-on-Mars, dead-or-alive, will cost at least $1 trillion and require breakthroughs in both technology and international cooperation. Dr. Taylor puts the completion of this endeavor, optimistically, in the 2040s. I believe funding could be a problem. On the other hand, bio-technologists are close to demonstrating the willful creation of life from non-living precursors. Using a pre-existing design, of course, but if scientists can create life from scratch in the lab, there’s your proof that God could have done it.

Short of time travel, which is very likely an absolute impossibility, could the scientific question of origins be proven beyond all possible doubt? At least today, it’s doubtful. Therefore some, reasoning that the question is unanswerable, adopt an agnostic point of view. But the big question Rod asked, “Is the First Cause for the origin of life spontaneous generation or creation?” really is a vitally important one. If there was no Creator then vast numbers of people are worshipping in vain. If there is a Creator then vast numbers of people are missing out greatly by not believing in God, since a communication claiming to be from him says (at Hebrews 11:6) “Moreover, without faith it is impossible to please him well, for he that approaches God must believe that he is and that he becomes the rewarder of those earnestly seeking him.” Due to the enormous complexity of even the simplest living cells, due the orderly ways in which the universe works, and also due to what’s revealed in the Bible I feel that it is logical to believe that we are here for a reason, and not because of a very long string of incredibly unlikely accidents.