In the first test of a key mineral-identification technique, Curiosity's mission scientists commanded the ChemCam instrument to fire its high-power laser at a small, nearby rock.

One of Warner Brothers' liveliest cartoon characters from the 1950s and '60s was Marvin the Martian, a soft-spoken alien who let his laser gun do all the talking. Now there's a real-life laser "gun" on Mars, and it was test-fired for the first time yesterday by mission scientists for the Curiosity rover. 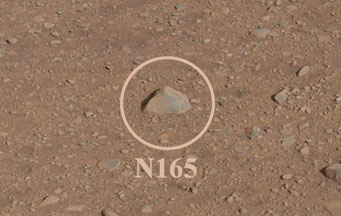 This small Martian rock, lying about 10 feet from Curiosity, was the first target for the rover's ChemCam instrument and its vaporizing laser.

The laser is part of the Chemistry and Camera (ChemCam) instrument, which can analyze the composition of rocks or soil samples up to 23 feet (7 m) away. In this case the target was a fist-size rock about 10 feet from the rover. Designated N165 (but nicknamed "Coronation") by the Curiosity team, the rock has angular facets that made for easy targeting.

During the test, ChemCam's near-infrared (1067-nm) laser fired 30 pulses, each only 0.000000005 second long, during a 10-second interval. Together these concentrated about 0.4 joule of energy on a pinhead-size spot, which created a momentary flash of light as a tiny bit of the rock became vaporized. A telescopic lens on the rover homed in on the incandescent puff of rock vapor, which was spread into 6,144 ultraviolet, visible, and infrared channels by ChemCam's trio of spectrometers. 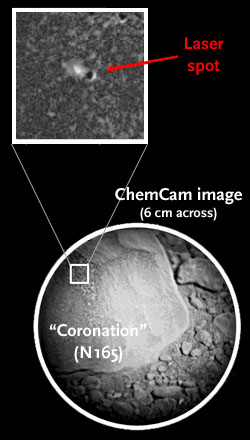 The first test of Curiosity's Chem Cam experiment, conducted on August 19, 2012, used a laser to zap a tiny pit in a fist-size Martian rock dubbed "Coronation."

"We got a great spectrum of Coronation — lots of signal," notes Roger Wiens, the instrument's principal investigator. Press releases describing the test are here and here.

ChemCam employs a technique called "laser-induced breakdown spectroscopy", which determines the composition of ionized gas from a target in extreme environments such as inside nuclear reactors. The team has put together a nice description of the LIBS technique to explain how it works. The laser, telescope, and camera were provided by CNES (the French space agency), while the spectrometers, electronics, and software were built at Los Alamos National Laboratory. (Fittingly, Marvin the Martian is the ChemCam team's mascot.)

LIBS has never been tried before on Mars, but in the coming weeks and months it should allow Curiosity to zap interesting rock and soil samples encountered along its path that are otherwise out of reach. Each spectrum should reveal the target's composition and thus its origin.

The laser can also be used to remove thin veneers of dust or weathered minerals to get at unaltered rock surfaces. Wiens and his team hope to use it thousands of times during the rover's two-year-long mission.

Chemical elements, such as aluminum and copper, and rock types like basalt give off distinctive spectra when ionized by an intense burst of laser energy.

It's worth noting that ChemCam almost didn't make it to Mars. In 2007, when the project was running both behind schedule and over budget, it was one of three instruments (along with MARDI, the Mars Descent Imager) removed from Curiosity's payload in order to get the rover ready in time for its planned late-2009 launch toward Mars. In the end, the technical challenges proved too serious and the launch was postponed two years. ChemCam and MARDI were reinstated, leaving zoom cameras for the rover's main eyes as the only significant instrumental castoff.

Meanwhile, mission scientists have decided where they'll first send Curiosity a-roving. It's about 1,300 feet (400 m) to the east, at a spot (dubbed Glenelg) where three distinct terrain types come together. One of these is layered bedrock, and during a NASA news briefing last week project scientist John Grotzinger hinted that these layers might become the rover's first drilling target.

Ultimately the plutonium-powered rover will be directed toward the lower slopes of Aeolis Mons (informally called "Mount Sharp"), where the team hopes to learn about geologic conditions on the planet during its early history.

Thank you for the immediate coverage of this event
BUT...
They told us that they did it but they didn't tell us what they found!
I hope your next report of news from Mars has some results.

Actually Marvin used an ACME Disintegrator gun, which I'm still waiting for someone to produce. Let's hope Bugs Bunny doesn't pop up from behind the next rock.
Seriously, looking forward to a long productive life from Curiosity, which I nominate as one of the seven wonders of Mars. What an incredible achievement.

How did the spectrum obtained compare to the famous ALH 84001 meteorite? Yes we were not told what was found. Curious if the spectrum match up well with meteorites on earth claimed to be from Mars.