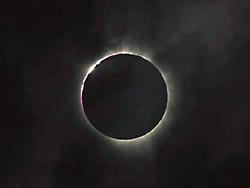 Eric Roel captured this view of the eclipse just as totality ended. It was shot from aboard the Orient Lines' Marco Polo located in the Indian Ocean, somewhere off the coast of Madagascar. The diamond ring is visible at the top left of the image.

Beginning at sunrise in the south Atlantic Ocean and concluding at sunset deep in the Australian Outback, the great total eclipse of 2002, albeit short, didn't disappoint those privileged to witness its glory.

Sky & Telescope dispatched three editors to the path of totality: one to South Africa, a second in southern Australia, and a third in the Indian Ocean between Madagascar and Mozambique. Totality ranged from about 30 seconds for Australian viewers, to nearly 90 seconds in South Africa, to a full 2 minutes 4 seconds 2,000 kilometers east of Madagascar in the Indian Ocean.

S&T senior editor Dennis di Cicco experienced 28 seconds of totality in the Australian Outback at sunset with the Sun just 4° above the southwestern horizon. He reports seeing a mostly round corona with a "somewhat four-leaf-clover shape." 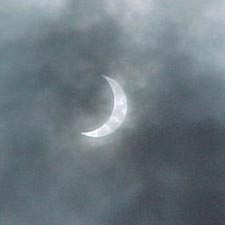 Most of Africa experienced dense clouds for the eclipse. This image of the deep partial eclipse was taken from Johannesburg, South Africa, with a digital camera.

What's more, with the Sun so low on the horizon, the eclipse appeared larger than life. This illusion, similar to when the Moon appears huge at moonrise, "made it look as if you were viewing the event with binoculars," says di Cicco.

"The real show was the Moon's shadow, however," reports di Cicco. "At the beginning of totality it rose extremely fast from the horizon to engulf the eclipse, and afterward it was easily seen as a distant cone of light over our heads racing off to the northeast — directly opposite the Sun in the sky."

Most observers Down Under weren't let down by the promise of clear skies, though it was touch and go around the Australian coastal town of Ceduna. Contributing editor Alan Dyer reports that at first contact the Sun was behind cloud but came in and out of view through the partial phases. Enough holes opened up to allow a mostly unimpeded view of totality. "The sight of the eclipsed Sun over water with some puffy clouds and the horizon twilight made for one of the best looking eclipse scenes I have seen," he writes.

Observers in Africa weren't so lucky. According to executive editor J. Kelly Beatty, "virtually all of southern Africa was clouded out." Moist air off the Indian Ocean blanketed most of the region during totality. Cooler air temperatures around maximum darkness only exacerbated the problem, says Beatty.
However, some observers in northern South Africa, while watching from the Zimbabwe border, experienced clear skies for totality.

Reports from the Indian Ocean — where editor in chief Rick Fienberg observed from aboard Orient Lines' Marco Polo — were mixed. More than 1,200 passengers had a somewhat muted show as the boat was underneath a moderately thick layer of clouds for the entire eclipse.

"Many of us thought that the Sun would disappear from view after 2nd contact, when the initial diamond ring winked out," writes Fienberg. "That's not what happened, though! We had a spectacular display of Baily's Beads, then a beautiful diamond ring, and then the corona appeared through the clouds as if by magic. The bottom edge of the Sun was rimmed with numerous prominences, and the inner corona — which was all we could see — had several obvious streamers, polar brushes, and other features."

This animation shows the eclipse traversing the Earth at about 2,000 kilometers/hour. During its 3-hour 21-minute journey, the tiny dark part of the Moon's shadow — the umbra — traveled about a third of the way around the planet. The umbra shadow is illustrated as a black dot (31 kilometers wide), and it delineates what parts of the globe witnessed totality. The penumbral shadow is the much larger gray circle, representing all areas that were treated to a partial eclipse.

Total eclipses occur around every 12 to 18 months, and any given location sees a total eclipse on average once every 375 years. Interestingly, by mere coincidence a small region of Angola was fortunate enough to be in totality today and during the last total eclipse in June 2001.

This will be the last easily accessible eclipse until March 29, 2006. For those seeking adventure, the next total eclipse is on November 23, 2003, but it will be visible only from Antarctica.