Usually when science and Hollywood meet, science loses. Moviemakers don't let the facts of physics get in the way of trying to craft a compelling story. How wrong movies can be pretty much launched the career of the Bad Astronomer, who has broadened to be science popularizer and all-around skeptic. 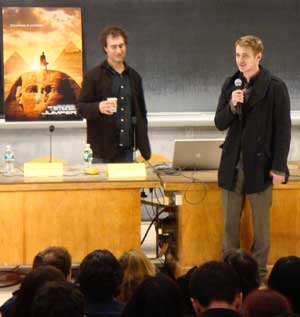 Hayden Christensen (right) speaks to the assembled students and press about teleportation and his new movie, Jumper, at MIT on Wednesday. Director Doug Liman (background) had just shown several scenes from the film.

On Wednesday evening, science and Hollywood met again at MIT, where physicists Max Tegmark and Edward Farhi talked about the realities of teleportation in regards to the upcoming movie Jumper, which opens on February 14th. Maybe that alone wouldn't draw much of a crowd (well, it might at MIT), but with starring actor Hayden "Darth Vader" Christensen and director Doug Liman also in attendance, then it should get interesting.

The program included a press conference with just the physicists, then a "red carpet" arrival of star and director for the local media, then the main event of showing several scenes from the movie followed by a Q&A period.

The premise of the movie is intriguing: A teenager discovers that he can teleport himself at will. Who wouldn't want to do that?! I loved the novel The Stars My Destination when I read it for a college lit class. Many a time I've been driving through Connecticut and thought back to that book and wish I could instantly teleport me and car the 100 miles from one end of I-84 to the other. I could picture every part of the road in my mind. 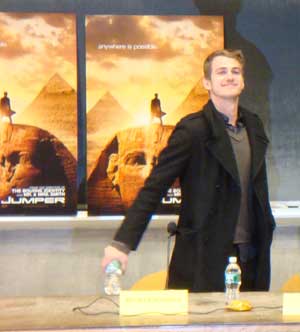 Hayden Christensen reacts to the crowd at the conclusion of the panel discussion about teleportation.

To boil down all the science, teleporting one particle has been done. Teleporting a substantial object is theoretically possible, but practically impossible. The physicists gave a very brief summary of how quantum mechanics is involved.

There was a good mix of questions that included ones about moviemaking, acting, and physics — plus a couple of personal ones, of course (someone had to ask Christensen to a party and another to go on a date). Liman looked a little befuddled by the event, but how would he not given that he said he had just finished editing the film?

Unfortunately we didn't get to hear all the discussion and witty comments by the panelists. Acoustics weren't that great in the auditorium so some laugh-generating questions and comments from the peanut gallery weren't heard. And sometimes the panelists made unheard comments while the crowd was laughing. Oh well. It was a fun evening of being part of the Hollywood promotion machine.

I don't mind pseudo-science when it makes for a great novel or movie, and I don't know any details of the upcoming movie. However as a philosopher I've thought a lot about the metaphysics of the self, and in light of that, I am convinced that teleportation is either impossible or at least could never be known to occur (but might instead be mere copying). In fact I've written my own science fiction story in order to highlight all the issues, which you can find here: http://www.scifidimensions.com/Oct05/teleporter.htm