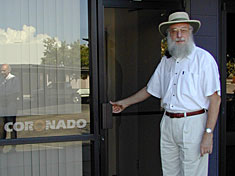 David Lunt stands at the entrance to his office in Tucson, Arizona, in October 2001. As the creative force behind Coronado solar filters, Lunt revolutionized amateur astronomy by designing and manufacturing affordable hydrogen-alpha filters and telescopes.

David Lunt, founder and principal optical designer of Coronado Technology Group in Tucson, Arizona, died on January 16th after a 22-month battle with cancer. He was 62 years old.

Coronado burst on the scene in the late 1990s with a new line of affordable, convenient hydrogen-alpha solar filters. These narrowband filters enable users of small telescopes to observe the Sun's chromosphere, the thin, active layer above the photosphere, or visible "surface." Seen in hydrogen-alpha light, the Sun appears alive, with ruby-red prominences jutting from the limb, dark filaments crossing the disk, and bright flares erupting around sunspots.

H-alpha filters had been available before, but they typically required electronic temperature control to maintain their narrow passpands, making them cumbersome to use in the field. Building on his earlier work in military and astronomical optics, Lunt came up with a design for an ultrastable filter needing no power input of any kind. He and his wife, Geraldine Hogan, soon founded Coronado and started marketing these filters to amateur astronomers. Their most recent product, the PST (Personal Solar Telescope), combines a 40-millimeter-aperture telescope and H-alpha filter into a complete system at the unheard-of price of just $500. 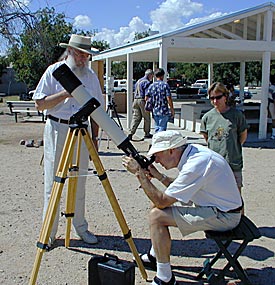 At the first "Hands on the Sun" workshop, held in October 2001 in Tucson, Arizona, Coronado's David Lunt watches as astrophotographer Jack Newton checks out the view of the Sun in a Tele Vue-102 refractor fitted with a Coronado hydrogen-alpha filter.

As a small company, Coronado found itself struggling to meet the increasing demand for its products. In October 2004 Lunt and Hogan agreed to sell their venture to California telescope giant Meade Instruments. The sale provided Coronado with a helpful jolt of human and financial capital and ensures that the company's telescopes and filters will continue to be available despite Lunt's passing.

Lunt was born in Denbigh, Wales, the son of professional opera singers. He came to the United States and attended Harvard University on a full scholarship but curtailed his formal education so that he could go to work and support his siblings. A brilliant optical designer, he contributed to the Strategic Defense Initiative ("Star Wars") and developed the mirror for NASA's first Orbiting Solar Observatory.

Before his illness forced him to curtail his activities, Lunt was a familiar face at star parties and other amateur-astronomy events, where his Coronado filters always attracted long lines of eager observers. Indeed, with his tall stature, flowing beard, and long, white hair tied back in a ponytail, Lunt was as much of a standout as his products.