After circling the giant asteroid for more than 13 months, NASA's ion-propelled explorer has eased itself onto a new course that will bring it to its second and even-larger destination, Ceres, in early 2015.

NASA has always had great success with missions to the outer solar system. For example, space-agency officials just celebrated the 35th anniversaries of Voyager 2 and Voyager 1, both launched (in that order) in 1977 — and both still operating at the fringes of the heliosphere. 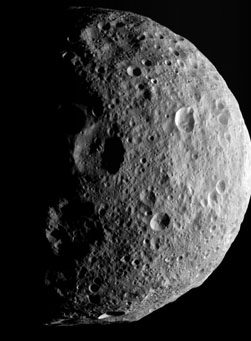 One of Dawn's final images of Vensta, taken August 25, 2012, looks directly down on the asteroid's north pole — a region that was unobservable (in shadow) when the spacecraft arrived in mid-2011.

Another way-out-there milestone occurred yesterday, when the Dawn spacecraft departed the giant asteroid 4 Vesta after a 13-month-long stay. Pushed along by a xenon-fueled ion thruster, Dawn has been gradually escaping from the gentle gravitational grip of Vesta since May and is now en route to its second destination, the even larger asteroid 1 Ceres, which it should reach in February 2015.

While at Vesta, the spacecraft did everything mission scientists hoped it would — and then some. The original timetable had a 40-day contingency in case the spacecraft had difficulty slipping into orbit around Vesta or while operating its suite of three instruments. But mission ops went so smoothly that, once a two-month-long stint in an especially tight orbit just 110 miles (180 km) above the surface ended, the entire 40-day pad remained unused. So the team returned Dawn to a higher-altitude mapping orbit, where it lingered long enough to record regions at Vesta's north pole that had been in shadow earlier in the mission.

"The expedition to Vesta has produced riches beyond everyone's hopes," says project scientist Marc Rayman (Jet Propulsion Laboratory). The cache of results from its orbital residency includes 31,000 photos, 20 million visible and infrared spectra, and hundreds of orbits' worth of neutron and gamma-ray spectra, along with gravity measurements acquired simply by carefully tracking the spacecraft's motion. 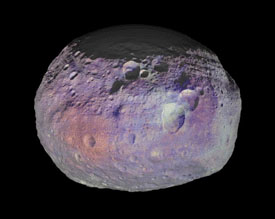 Scientists combined visible and near-infrared to create this false-color view that emphasizes compositional differences on Vesta. However, it's not yet clear what the individual minerals are. Click on the image to see a rotating view of the entire asteroid.

Planetary geologists have long realized that Vesta is no mere asteroid, because even from here they can tell that lava flows cover part of its surface. But Dawn's close scrutiny revealed that the second-largest asteroid, oblong in shape with a mean diameter of 330 miles (529 km), was once molten throughout. It has a crust, a mantle, and an iron-rich core.

The northern half of Vesta's surface is an ancient craterscape, but the southern hemisphere was totally transformed by the formation of two giant basins named Veneneia (at least 2 billion years old) and Rheasilvia (1 billion years). These blows would have completely shattered a smaller body, and they still managed to scatter pieces of Vesta throughout the inner solar system. By one estimate, about 6% of all meteorite falls are shards of Vesta's surface.

A 2½-minute video of Dawn's "greatest hits" highlights the spacecraft's most-important discoveries about Vesta. (There's no narration, but turn down the volume if you're not a rock-music fan.) And do get in the habit of reading Rayman's excellent Dawn Journal — he'll offer periodic updates during the long cruise to Ceres.

Some body should decide which is the biggest asteroid-Vesta or Pallas? Biggest since Ceres doesn't count since it has been promoted to 'Dwarf Planet!'

Some body should decide which is the biggest asteroid-Vesta or Pallas? Biggest since Ceres doesn't count since it has been promoted to 'Dwarf Planet!'

We have become so accustomed to the phenomenal accomplishments of the space age that we sometimes fail to realize just how great all this really is. It's like checking out the third joint of the fifth flea's left leg on my dog's right ear... while he's chasing a car! Can't wait to see what Ceres has to offer. Hats off to the men and women who make this happen... and to the taxpayers who realize that this worthwhile endeavor is money well spent!

Absolutely amazing story. Over the course of my life, we've gone from those first few moon steps, and hazy, fuzzy images of places like Mars and Jupiter to millions of images from all over the solar system. We have plumbed the depths of Venus and Titan, expolred Mercury, have camped out on Mars for years now, discovered volcanoes on Io and water on Europa. Really an amazing age--and the Dawn mission is really just an outstanding exemplar of this--sending a small craft to a 300-mile wide rock and successfully orbiting it for months--seeing things we only imagined a generation ago--and now on to Ceres--and even more images and discoveries that we can only begin to imagine. Go Dawn!