Planets with Earth-like atmospheres might be easier to detect around white dwarfs than normal stars. 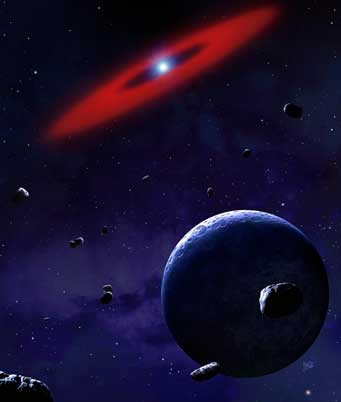 This artist's illustration shows the dusty disk surrounding the white dwarf SDSS1228+1040. Astronomers think this disk was created from the debris of a disrupted asteroid.

In the last decade, astronomers have gone from barely detecting a few hot Jupiter exoplanets to observing small rocky planets just larger than Earth around low-mass stars. The search for Earth's twin is ongoing, but astronomers are already asking the next question: Once Earth's twin is found, how do we know if it is home to life?

A pair of astronomers has a new prediction that suggests our best chance for identifying signs of life on other planets might not be where we usually look. Abraham Loeb (Harvard University) and Dan Maoz (Tel-Aviv University, Israel) recently published a study that suggests white dwarfs, not main-sequence stars, may be our best chance for observing signs of life on planets around other stars.

White dwarfs are the remnants of low-mass stars like our own Sun. They are the small, dense embers of a stellar core, containing about 60% of the original star’s mass in an orb roughly the size of Earth. (It would take more than 100 Earths lined up in a row to traverse the Sun’s diameter.) These stars cool slowly, maintaining stable temperatures close to that of the Sun for more than 3 billion years. Recent studies have revealed rocky material in disks around white dwarfs, as well as polluting the dead stars’ atmospheres, which suggests the white dwarfs swallowed up infalling asteroids or planets. While planets in Earth-like orbits probably wouldn't survive the bloated red giant phase of a white dwarf's predecessor, planets that migrated inward during the star’s death throes might receive enough warming radiation to create life-sustaining conditions on their surfaces.

To detect the presence of life on other planets, astronomers are looking for molecules that can only form in the presence of life. Molecular oxygen is the strongest biosignature, as it is mainly produced by green algae and large plants on land. The amount of oxygen in Earth's atmosphere rose sharply after vegetation appeared, jumping from a few percent to 20-30%. If all oxygen-producing life disappeared from our planet, molecular oxygen would disappear from the atmosphere after a million years or so. Thus, the detection of oxygen in another planet's atmosphere would be a strong indication that life exists on that planet.

The detection of atmospheres on other planets is quite difficult and can only currently be done for transiting exoplanets. As the planet passes between Earth and the star, some of the starlight passes through the exoplanet’s atmosphere, where certain wavelengths are absorbed by the compounds in the planet’s gaseous envelope. These absorption lines are telltale signals of what’s in the planet’s atmosphere. By comparing those spectra to what’s observed when the planet is hidden behind the star (when just the pristine stellar spectrum appears), astronomers can tease out the composition of the exoplanet atmosphere.

Only a handful of exoplanets have been studied in this fashion, since the signal from the planet is usually about 10,000 times weaker than the background starlight. Detecting such a minute drop in starlight is a bit like trying to spot a dead light bulb on the Eiffel Tower at night.

But this detection would be much easier for a planet orbiting a white dwarf, Loeb and Maoz say. White dwarfs’ tiny size and dim light output would make an exoplanet’s atmosphere easily detectable — especially the important signal from molecular oxygen, if the amount of atmospheric oxygen roughly matches Earth’s. They simulated the spectrum of an exoplanet as seen by the upcoming James Webb Space Telescope (JWST), which will study exoplanet atmospheres as one of its primary science goals. Loeb and Maoz found that the observing time needed to tease oxygen’s signature out of the atmosphere of a white-dwarf-orbiting planet is a factor of ten lower than for other planets, making white dwarfs a fertile hunting ground for detecting life-sustaining worlds outside of our solar system. Detecting water vapor (which has already been done around other planets) would be even easier.

There is a caveat to white dwarf worlds. Because white dwarfs cool down over time, the radius of their habitable zones shrinks as they cool. A planet that was once in the Goldilocks zone will be outside it a couple billion years later.

Still, these burnt-out stellar embers could be the best targets for studying exoplanet atmospheres. They may just end up as one of the first targets for JWST.

The other caveat is that such worlds may not have any water. The authors put the habitable zone nominally @ 0.01 AU, much closer than Mercury, and the WDs have already gone through their main sequence and red giant phases, hotter than the sun. It is easy to imagine a rocky planet surviving the red giant phase, but it is hard to imagine one having any water left!

They would have to receive water the old fashioned way – cometary impacts. But how many comets could survive the Red Giant phase? These planets will likely be parched indeed, so how long would it take plants like cactus to oxygenate an atmosphere?

Bruce et al. I pass this observation of mine along. According to stellar evolution theory, young stars have disks. An example is TW Hydrae. Now white dwarfs have disks so the disks must have formed billions of years later after the ZAMS stage, after the red giant stage and planetary nebula stage which is something we cannot observe in this explanation. The white dwarfs with disks, perhaps the disks formed along with the star or shortly after the white dwarf formed.

Rod, I did not mean to imply by my above post that I think that desert flora might evolve on such white dwarf planets. I merely meant to express my skepticism as to the notion that these worlds would (1) have enough water to be habitable (agreeing with Peter’s point) and (2) even if they managed somehow to receive some hydration the kind of plant life that could grow on such a world would produce oxygen very slowly. Therefore my opinion is that the search as outlined in the article for oxygen atmospheres on planets in tight orbits around WDs is quite likely to be futile. I do think however that rocky planets in tight orbits around WDs will continue to be found. A second round of planetary accretion may not even be required for these objects to exist, for a simple way for them to have formed is as the remnants of pre red giant planetary systems.