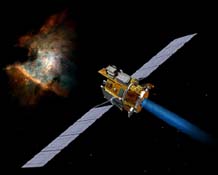 When launched, the Deep Space 1 spacecraft weighed 486 kg, including 82 kg of xenon to fuel its ion-drive engine. Its solar-cell 'wings' measure 11.8 meters (38.6 feet) from tip to tip.

At noon today (Pacific time), engineers at NASA's Jet
Propulsion Laboratory in Pasadena, California, officially concluded
the Deep Space 1 mission by turning off the craft's xenon-fueled engine.
Launched on October 24, 1998, this inaugural flight in NASA's New Millennium
program was designed to demonstrate
the viability of a dozen new and unproven technologies. Included in
the list was an autonomous star tracker that enabled the craft to guide
itself without human intervention, and a xenon-ion engine, which retired
with 670 operating days under its belt. The engine's strong performance
and surprising endurance have paved the way for future deep-space explorations
using this highly efficient propulsion method.

Early on Deep Space 1 was a relatively trouble-free mission.
Only nine months after launch, it had successfully tested all 12 of
its technologies and thus completed its main objectives. On July 29,
1999, the craft swept very close to 9969
Braille, but problems in gauging the asteroid's brightness reduced
the flyby's scientific return. Two months later the navigation camera
failed, leaving the craft unable to see its way through interplanetary
space. A major rescue effort ensued, during which the multispectral
imager was reprogrammed to handle the dual roles of science and navigation.
The successful fix allowed DS1 to complete its rendezvous with periodic
comet 19P/Borrelly on September 22, 2001, when it obtained the best-ever
images of a cometary nucleus and probed Borrelly's interaction with
the solar wind.

Despite concluding its pathfinding 38-month tour of duty,
this "aged, wounded, intrepid, and very very happy explorer" (in the
words of project manager Marc
Rayman) might still live on. Engineers will leave its radio receiver
turned on indefinitely as the craft silently circles the Sun. "Deep
Space 1 is a true success story," said Charles Elachi, JPL's director,
in a prepared statement. "We are proud that future generations of spacecraft
will benefit from its accomplishments."