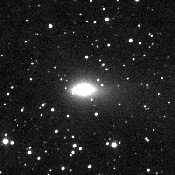 Comet Borrelly, which orbits the Sun every 6.8 years, passed through perihelion on September 14th — just 8 days before Deep Space 1 flew past at close range. Georgia amateur Tim Puckett recorded Borrelly's coma and faint tail a half day later with his 30-centimeter telescope.

After weeks of concern that Deep Space 1's high-speed
rendezvous with Comet Borrelly would fall short of expectations, project
manager Marc Rayman beamed with happiness and relief tonight after learning
that the encounter had gone perfectly. The spacecraft flew through the
comet's gas-and-dust coma and passed just 2,200 km (1,400 miles) from
its icy heart at about 22:30 Universal Time (3:30 p.m. PDT). "Things
went extraordinarily well," Rayman told Sky & Telescope from
his office at the Jet Propulsion Laboratory in California. "It's been
an awfully successful day."

Data continue to stream toward Earth from Deep Space 1's
experiments, but already it's clear that the spacecraft succeeded in
keeping its instruments trained on the bright nucleus as it swept by
at 16.5 kilometers (10 miles) per second. Some images are already in
the hands of mission scientists, and a few dozen others should arrive
in the coming days. Equally important are infrared scans that may reveal
something of the nucleus' composition and temperature, as well as ion
and magnetic measurements taken as the craft traversed the coma.

The first mission in NASA's New Millennium program, Deep
Space 1 was launched on October 24, 1998, to test 12 high-risk technologies
for use on future spacecraft. Among these was the ability to autonomously
track and chase a moving target. The tracking system experienced some
problems during a flyby of asteroid 9969
Braille in July 1999, and few months later its navigation camera
failed outright. But Rayman and his team reprogrammed the "science"
camera to serve as the star tracker, knowing that the spacecraft would
be on its own during the crucial hours when it was nearest the comet.
Whatever they did obviously worked, because the infrared spectra of
the comet now in hand attest that Deep Space 1 remained pointed at the
nucleus to within 0.11°. "I must have said this a hundred times
already," Rayman beams, "but I can't believe how cool this is."

NASA expects to release the first images and other science
results from the flyby sometime this week.