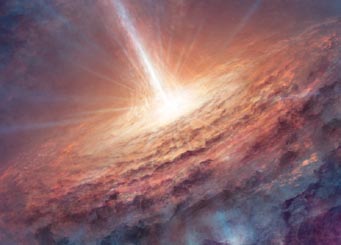 In this portrayal, gas and dust from a surrounding gas cloud spiral in toward the still-forming Sun. A new study strengthens the idea that a massive superstar in the vicinity triggered the cloud's initial collapse.

It's an exciting time to be a cosmochemist. State-of-the-art laboratory techniques for analyzing traces of elemental isotopes are now so good that the "born on" date for billion-year-old rocks and minerals can be pinpointed to well within a million years. This kind of precision has opened dramatic new windows on how our solar system came to exist 4,567,200,000 years ago.

Take, for example, the radioisotope iron-60 (60Fe). The discovery that ancient meteorites contained this key geochemical marker, together with aluminum-26 and calcium-41, requires that some violent astrophysical event led to the collapse of the interstellar cloud that formed our solar system. And since 60Fe can only be forged during a supernova, for decades theorists have generally agreed that shock waves from the demise of a nearby star triggered the cloud's collapse.

But most likely it didn't happen that way. In the May 25th issue of Science, Martin Bizzarro (University of Copenhagen) and five colleagues describe their studies of 60Fe in some of the oldest known meteorites. Iron-60 has a half-life of just 1.5 million years, so Bizzarro and his team assayed the nickel-60 created when the short-lived isotope decayed. Surprisingly, they found that the very oldest meteorites contain vestiges of 26Al but lacked the decayed 60Fe that should have been there. Yet the iron was present in meteorites that crystallized about a million years later. By implication, the solar system was already coming together when the putative supernova went "bang!"

So what did trigger the cloud's collapse? Several years ago Roger Chevalier (University of Virginia) pointed out that solar system could have garnered its 26Al from matter violently expelled by a huge neighboring star, one dozens of times more massive than our Sun. Such giants burn fast and die young, exploding as supernovas in just a few million years. So this dying star delivered a powerful one-two punch: its 26Al-rich winds jump-started the solar system, and its annihilation soon thereafter infused the gas-and-dust disk surrounding the newborn Sun with 60Fe and other byproducts. 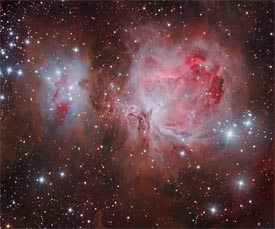 Our solar system may have condensed in a crowded stellar neighborhood inside a massive cloud of gas and dust. The Orion Nebula, illuiminated by a cluster of hot, young stars at its center, is just such a place. Hundreds of stars are forming in the folds of Its billowing gas clouds.Click on the image for a larger view.

"Very massive stars do not form alone, but in clusters" Bizzarro notes. "We therefore hypothesize that this is the kind of environment where our solar system was formed: a dense stellar cluster, in association with numerous massive stars." We see just this sort of environment today in the Orion Nebula, where hundreds of suns are emerging from the huge nebular cloud surrounding the dazzling Trapezium stars at its center.

"I view this as a paradigm shift," observes Alan Boss (Carnegie Institution of Washington), a planet-formation theorist. Not only would the death throes of a nearby supermassive star account for the puzzling iron-60 results, he observes, but those strong winds and shock waves might also explain other solar-system oddities such as how Uranus and Neptune were left with so little hydrogen.

Having our solar system come together in a crowded stellar neighborhood might also explain why a growing number of objects in the distant Kuiper Belt, such as 90377 Sedna, have swollen, highly elongated orbits that can't be explained by planetary interactions long ago. Most likely, dynamicists say, a star drifted through the Sun's immediate neighborhood early in solar system history and "stirred up" the Kuiper Belt. And the odds of that chance encounter are much higher if our Sun formed in a close-packed cluster of siblings.