Did an Impact Trigger the "Great Dying"? 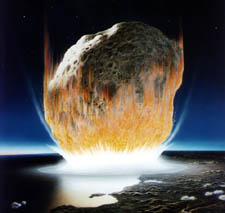 Sixty-five million years ago the cataclysmic impact of a gigantic asteroid or comet disrupted the world's climate and wiped out most flora and fauna on Earth, including the dinosaurs. This painting by Don Davis depicts the scene a few seconds after the body struck just north of what is now Mexico's Yucatán peninsula.

It's been nearly a quarter century since geologists realized that a colossal impact contributed to (and probably caused) the decimation of the dinosaurs and vast numbers of Earth's other species 65 million years ago. Eventually this event's smoking gun, a crater some 180 kilometers across, was discovered beneath what is now Mexico’s Yucatán Peninsula.

In the years since researchers have sought evidence linking impacts with other mass extinctions of life throughout geologic history. The biggest of these, 251 million years ago, ended the vibrant Permian period and nearly left Earth sterile: 90 to 95 percent of all species died within a geologic blink of an eye. No compelling explanation for the Permian-Triassic extinction — widely called the "Great Dying" — has yet gained favor.

Now seven geoscientists, led by Luann Becker (University of California, Santa Barbara), believe they’ve identified evidence of a huge impact on the northwest margin of Australia. In the May 13th ScienceExpress, they claim that the Bedout High, a broad plateau now deeply buried beneath seafloor sediment, is actually the uplifted center of an impact crater comparable in size to the Yucatán's huge scar. The notion that Bedout is an impact site was first proposed 8 years ago by petroleum geologist John Gorter, but the idea languished until Becker and coauthor Robert J. Poreda (University of Rochester) examined core samples extracted from Bedout’s central uplift.

"We realized right away this was no ordinary volcanic rock," Poreda explained at a press conference yesterday. Closer inspection revealed shocked and melted rock, evidence that convinced the team members that Bedout was truly formed by impact. Isotopic dating has since yielded an age of 250.7 ± 4.3 million years — a close match to the extinction’s age. They also cite evidence of fallout from the blast found in Antarctica (including meteoritic fragments), China, and Japan that supports the impact claim.

Becker, Poreda, and their colleagues say that much more work is needed before Bedout can be linked compellingly to the extinction, but already other impact specialists have begun to express a lot of skepticism. For example, Andrew Glikson (Australian National University, Canberra) found no evidence for impact-induced shock when he examined one of the Bedout drill cores. Other impact specialists wonder how the crater's central uplift could have been preserved even though none of its outer rim is evident. And none of the Permian-Triassic boundary layers show an excess of iridium, a telltale element that's rare in Earth’s crust but common in meteorites. 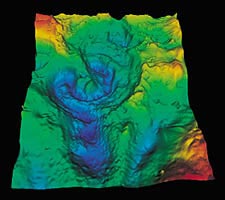 For nearly a decade geologists searched for the crater that supposedly formed when a 10-km-wide object struck Earth at the end of the Cretaceous period 65 million years ago. In 1990 a huge circular structure, estimated to be 110 miles in diameter, was found centered beneath the coastal town of Chicxulub, in Mexico's northern Yucatán peninsula. The Chicxulub crater, shown in this false-color, 3-D gravity map, proved to be the long-sought impact site.

Extinction expert Douglas H. Erwin (National Museum of Natural History) finds the evidence linking Bedout to the Great Dying intriguing but inconclusive. "We need to establish that these [events] happened at exactly the same time," he says. Moreover, many paleontologists point to a massive outflow of lava in what is now Siberia as a more likely cause for the Permian-Triassic extinction. All told, volcanoes disgorged some 2 million cubic kilometers of molten rock that covered an area the size of Europe. The eruption, proponents argue, choked Earth's atmosphere with enough carbon dioxide and noxious gases to trigger an abrupt greenhouse effect. That climatic upheaval led to a wholesale eradication of life in no more than 160,000 years.