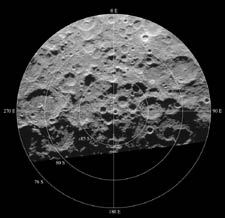 This image of the Moon's south pole isn't a photograph — it's a radar map obtained with the Arecibo telescope in Puerto Rico. Some of the deep crater walls and floors illuminated by radar in this scene have never seen sunlight. These regions could be 'cold traps' where stray water molecules freeze permanently onto the ground. But any ice sheets would have shown up brilliantly in radar.

For centuries astronomers have known that the airless, Sun-baked Moon is dry. But the discovery of craters with permanently shadowed floors near the lunar poles raised an exciting possibility: Perhaps these dark hideaways contain water ice that could be mined by future astronauts?

In the 1990s the Clementine and Lunar Prospector spacecraft implied that such ice existed. The results were met with much fanfare in the media — it appeared that there was indeed ice on the Moon. But now scientists probing deep into the polar surface with radar have concluded that lunar ice, if present, will be more difficult to extract than some have proposed.

Theory says that it's tricky, but possible, to preserve water on the Moon. The Sun rises a scant 2° above the horizon at the poles. This means that the deepest craters have regions inside them that remain permanently in shadow. Water molecules ejected into space from rare cometary impacts might freeze into these pitch black "cold traps." Or perhaps hydrogen from the solar wind could combine with oxygen atoms in the lunar regolith (dust and rock) and form water molecules — a few of which find their way to the traps over the eons. Something like these processes must happen on barren Mercury, where radar has revealed sheets of ice at the planet's poles.

When Clementine orbited the Moon in 1994, its transmitter bounced radio waves off the poles and toward Earth. The reflected signal suggested, though didn't prove, the presence of water ice. Four years later NASA's Lunar Prospector looked at the poles with its neutron spectrometer and found an abundance of hydrogen near both poles, which was inferred to be from ice within about 1 meter of the lunar surface.

Now Bruce Campbell (Smithsonian Institution) and colleagues have imaged the Moon's polar regions with the powerful Arecibo radar transmitter in Puerto Rico. Previous radar studies had probed the upper few centimeters of the poles at 3.5- and 12.6-centimeter wavelengths, but Campbell used 70 cm to see several meters below the surface.

The observations looked into permanently dark crater floors and showed that they do not have thick sheets of ice like Mercury. This result stands in stark contrast to the water hype of the late 1990s, when some experts speculated that tens of thousands of square kilometers were so rich in ice that astronauts could easily shovel it up. The Arecibo data instead suggest that if any frozen patches exist, "they are spread out in low concentrations," says Campbell. Any ice sheets are at most a few centimeters thick and interlayered in the lunar dust.

This arid outlook doesn't discredit the previous missions results, however, it just opens them up to a different interpretation. Clementine's data came primarily from the rugged side of one crater wall, not its smoother floor. The rougher the terrain, the more likely that a reflected signal will mimic ice.

According to Campbell, there are also "interpretive difficulties" with the Lunar Prospector data. The craft lacked the resolution to discern individual craters and the enhanced hydrogen signals tended to lap into areas that weren’t in permanent shadow. "Are you seeing a resolution effect or a genuine feature?" asks Campbell. "Looking at the data as it stands, Lunar Prospector doesn't have the spatial resolution to uniquely associate the hydrogen signal with shadowed craters."

However, models by Richard Vondrak (NASA/Goddard Space Flight Center) and colleagues can account for Lunar Prospector's neutron-spectrometer results and also agree with Arecibo findings. According to Vondrak's work, frost from solar-wind-formed water could become buried underground by the slow "gardening" of the regolith by small meteorite impacts. In this scenario, the ice would be thoroughly mixed into the regolith and never appear in sheets. "There could be water at the poles, but not like an ice rink," says Vondrak.

Despite the radar result's drier implications, Campbell adds, "It's clear from the Lunar Prospector data that there is something interesting about the polar regions. It's still worthwhile to send a probe into the shadowed regions to measure not just water, but other volatile materials." 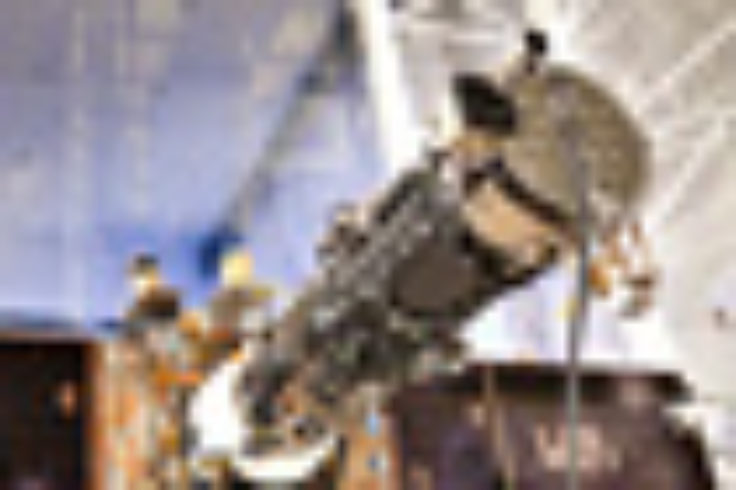