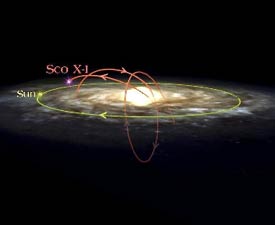 According to a new study, this diagram of our Milky Way galaxy shows how Scorpius X-1 — the brightest X-ray 'star' in the night sky — moves through the Milky Way. Sco X-1's convoluted trajectory (here colored red) may attest to its having been cast off by a globular cluster in our galaxy's halo. The Sun's nearly circular orbit around the galactic center is shown in yellow. Click on the image to watch a 4 megabyte GIF animation (times before the present are listed in millions of years).

Living in an environment orders of magnitude denser than the solar neighborhood, each star in a globular cluster is likely to experience a close encounter with at least one other during a cluster's multibillion-year lifetime. Binary-star collisions are particularly dramatic: the gravitational energy within a binary star can be converted into kinetic energy during run-ins with other stars or binaries. Occasionally a binary can even be flung out of its parent cluster.

That's what may have happened to Scorpius X-1, according to a new study by astrophysicists I. Felix Mirabel and Irapuan Rodrigues (French Atomic Energy Commission). The night sky's brightest "star" to X-ray eyes, Sco X-1 was discovered in 1962 by Geiger counters aboard an Aerobee rocket. Astronomers now know that Sco X-1 is a tightly bound binary system, with a swollen gaseous star orbiting a neutron star — a superdense ball of nuclear matter. Gas spills from the evolved 12th-magnitude star (visible, in principle, through amateur telescopes) into the neutron star's strong gravitational grip. The process heats the gas to temperatures measured in the millions of degrees, which causes the system to give off copious X-rays. The binary also sporadically spurts out jets of relativistic particles, making it a microquasar (albeit an unusual one; most microquasars contain black holes, not neutron stars). 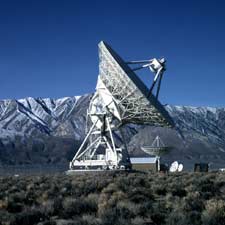 Scorpius X-1's proper motion — its motion across the plane of the sky — was measured with the Very Long Baseline Array (VLBA), an array of 10 radio telescopes stretching from Hawaii to the Virgin Islands. This VLBA antenna stares skyward from California's Owens Valley.

By combining recent measurements of Sco X-1's motion with a model for the Milky Way's gravitational field, Mirabel and Rodrigues made an educated guess about the microquasar's orbit. Sco X-1, they conclude, careens tightly around our Milky Way's core, then loops outward on a highly eccentric orbit that takes it nearly 14,000 light-years above the plane of our galaxy. This orbit resembles those of two globular clusters thought to originate in the Milky Way's halo, the scientists report in the European journal Astronomy & Astrophysics. "Probably this neutron star picked up its companion and was thrown out of its globular cluster by a close encounter with other stars at the cluster's core," said Mirabel in a January 27th press release. 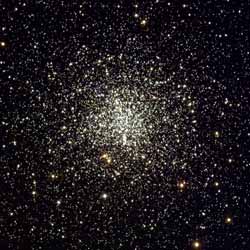 Though we currently see the bright globular cluster M4 in the direction of the galactic center, it originated in (and periodically returns to) our Milky Way's sparse, spherical halo, following an path similar to Sco X-1's.

Mirabel and Rodrigues admit that Sco X-1 might have gotten its eccentric orbit from an impulsive kick when the neutron star's progenitor went supernova. In fact, along with four other astronomers they came to just this conclusion in the case of a different microquasar called GRO J1655–40, whose proper motion they measured with the Hubble Space Telescope. A supernova kick could reconcile Sco X-1 with an origin in the Milky Way's midplane. But it's unlikely, say Mirabel and Rodrigues, that Sco X-1's closely paired stars would've remained in orbit around one another after enduring a supernova explosion strong enough to propel the binary into its loopy, high-energy orbit.