The High-Resolution Imaging Science Experiment, or HiRISE, is a 20-inch (0.5-m) f/24 telescope — the largest ever flown to another world — that serves as the primary camera aboard NASA's Mars Reconnaissance Orbiter. Its job is to look down on the Red Planet and record the ruddy landscape with unprecedented detail — typically just 1 foot (0.3 m). 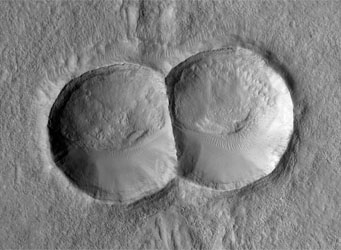 Twin Martian craters, each about 1 mile across, appear in this January 10th image from the HiRISE camera on Mars Reconnaissance Orbiter. Click here for a larger view.

The camera continues to click away, and on January 10th it spotted a remarkable double crater in the Icaria Fossae region. As HiRISE principal investigator Alfred McEwen (University of Arizona) points out, whatever excavated these conjoined pits, each about 1 mile (1½ km) across, "must have separated into two distinct pieces prior to impact in order for two craters to be recognizable." There's no way to tell if the paired projectiles were from an asteroid or a comet, but the two pieces must have been equally massive to make equally sized craters.

The impactors wouldn't necessarily have hit at precisely the same moment: for example, even striking at the relatively slow collision speed of 10 miles (15 km) per second, they could have trailed one another slightly. However, the near-perfect symmetry, including the splash of debris extending out of the frame toward the top and bottom, argues for a side-by-side delivery. 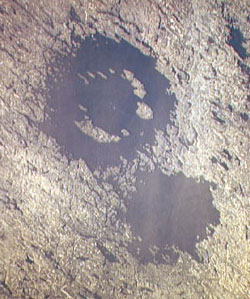 The Clearwater Lakes (Lac Ã  l'Eau Claire in French), a double crater created 290 million years ago, are 36 and 26 km across.

Planetary scientists now realize that the solar system's smallest bodies come in a wild assortment of shapes. It's not too much of a stretch to imagine that lumpy bodies like Comet 103P/Hartley 2 or asteroid 25143 Itokawa could have created this feature. McEwen's team has also identified the remnants of a triple crater elsewhere in the HiRISE archive.

Double craters aren't especially rare, even on Earth. The side-by-side Clearwater Lakes in northern Québec aren't quite equal in size, but they're big — they must have made a real mess of things when they formed some 290 million years ago.

Of course, HiRISE is spotting far more than just curious craters. Check out this gallery of amazing shots taken from its first 4½ years of operation.

It is wonderful of NASA to put such great and current information online for all of us space enthusiasts to see. I am glad you are picking them up and making us aware of them. Mars is a great challange. I hope people stand on it in my lifetime.

I am suspicious of the photo explanation. If you look at the enlarged version, there seems to be a discontinuity visible from top to bottom of the photo that passes through the merging of the two craters. I do not suspect photoshop at work but I think there is more to these two craters than has been offered as an explanation.

I would vote for a comet on this one. The reason is results from a series of simulations done on GravitySimulator to check out the lost moon of Triton.

Whenever a binary pases a planet, it's orbit changes, usually significantly. It can continue on as a binary but with an eccentric orbit, separate, or collide. In the four and a half billion year history of the Solar system we would expect most binaries not in the Main belt to become single objects. Collisions are not that uncommon; if one object follows directly behind the other, their rotation with respect to each other is canceled, thus no centrifugal force and the objects fall towards each other.

Both this new set of craters and the Clearwater lakes have nice, tight orbits. I don't think asteroids can keep this situation for a long time, but comets fresh from the Oort or Kuiper belts most likely haven't been around heavy objects for a long time, so they would still have orbits similar to the formation orbit.

I know two examples does not a statistical study make, but that's my comment!