Astronomers have revealed a supposedly monster black hole to be rather ordinary in size.

A black hole has been cut down to size. 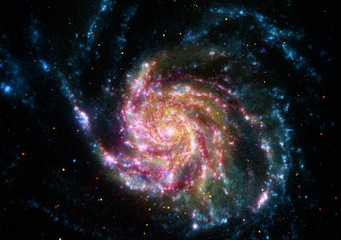 Burrowed in an arm of the grand design spiral galaxy M101, the binary system ULX-1 powers X-ray flares so bright that astronomers thought this beast must contain hundreds or even thousands of solar mass. But like a cosmic rendition of The Wizard of Oz, new observations reported in the journal Nature rip away the curtain to reveal a relatively ordinary black hole.

Ji-Feng Liu (Chinese Academy of Sciences) and colleagues monitored M101 ULX-1 over a period of three months from the Gemini North Observatory in Hawai’i. They picked a quiet period to observe, avoiding the weeks-long flares the black hole unleashes every six months or so. During those times, the flares are 100 times brighter than usual, qualifying the system as an ultraluminous X-ray source (ULX, hence its name).

An ordinary, stellar-mass black hole can’t emit flashes that bright, at least not if it’s munching leisurely on a gaseous snack. So there are two options. One, the black hole itself could be super-sized — that is, hundreds or thousands of times the mass of the Sun — but that’s hard to explain with current black hole formation theories.

Two, a regular-size black hole could be gobbling its meal at super-sized rates — though that option is troubling, too. The radiation produced by such high rates of accretion should belch the gas out of the system before the black hole has a chance to swallow.

Of the 200-some ULX’s known, M101 ULX-1’s luminosity and spectrum put it on an exclusive list of 10 or so candidates that might contain a super-size black hole. But when Liu’s team monitored the system’s spectrum between February and May 2010, they pieced together a different story. 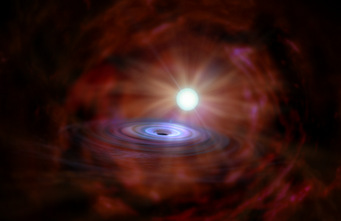 M101 ULX-1 is most likely a black hole tens of times as massive as the Sun, rather than the 1,000-solar-mass monster it was previously thought to be. This illustration shows the feeding black hole with its companion, the windy Wolf-Rayet star that whips around the black hole every 8.2 days.

First, the team showed that the black hole’s companion is a rare Wolf-Rayet star about 19 times the mass of the Sun. This aging star has only a few hundred thousand years left to live, and before it goes (with a blast that might be seen across the universe), it sheds its outer layers in a thick wind, losing about an Earth’s mass every year.

Second, Liu’s team tracked the Wolf-Rayet star’s orbital motion via the Doppler shift that pushes its spectral lines first to the red and then to the blue, measuring a period of 8.2 days.

In theory, plugging this information into Kepler’s laws of orbital motion would settle how massive the black hole really is. But to make that calculation, you also have to know whether the system is face-on, edge-on, or something in between.

Since the system’s inclination is unknown, all Liu’s team can say for sure is that the black hole’s mass is more than 5 times the Sun’s. A face-on system could have a super-size black hole 1,000 times the mass of the Sun, but the system is more likely to be inclined at an angle to our line of sight rather than aligned exactly face-on, so the astronomers argue the black hole is probably of the smaller, stellar-mass variety.

That result takes one super-size black hole out of the running. The search is still on to confirm the remaining candidates. Those candidates classified as super-size by their luminosity and spectrum, as M101 ULX-1 was, might also turn out to be stellar-mass black holes in disguise.

And the story isn’t over yet for M101 ULX-1 either: astronomers still have to figure out how this ordinary black hole can gobble down a Thanksgiving-worthy feast without blowing the feast apart.

"astronomers still have to figure out how this ordinary black hole can gobble down a Thanksgiving-worthy feast without blowing the feast apart." Actually, I think it does blow the feast apart. It's a transient source, that reaches or exceeds its Eddington luminosity only during short outbursts (lasting only a few days), during which it probably blows away the accretion flow. Outbursts are separated by lower-luminosity phases during which accreting material builds up again.