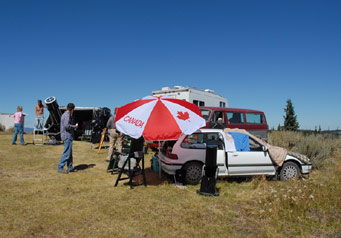 Observers converged on the British Columbia interior for the 23rd annual Mount Kobau Star Party — one of the largest events of its kind in Canada.

The 23rd annual Mount Kobau Star Party (MKSP) took place from August 19th to 26th in the interior of British Columbia, atop the 1,830-meter high (6,000 feet) mountain selected in the 1960s as the best site for a major new Canadian observatory. Though the observatory project was canceled long ago, as usual, a hearty group of amateur astronomers primarily from B.C., Alberta, and Washington State braved the elements to plumb Kobau's dark skies for astronomical treasures. And joining them this year was the spirit of Edward Emerson Barnard.

The legendary astronomer's presence was first conjured during Lee Johnson's talk, which described hunting down some of the many dark nebulae that Barnard is famously associated with. During Johnson's presentation, Seattle comet enthusiast Dave Hoover pointed out that Comet Barnard 2 (designated 177/P Barnard 2, or P/2006 M3) had brightened to 8th-magnitude and was visible all night long as a circumpolar object near the head of Draco, the Dragon. As Hoover noted, the comet is making its first return journey since Barnard discovered it in June 1889.

As a result, Kobau participants took a break from their usual deep-sky hunting to view some dark nebulae and check out Barnard's comet. In my own 8-inch scope, the comet was an easy find — a conspicuous, tailless fuzzball near Mu (μ) Draconis. Others reported seeing the object in binoculars. (A finder chart is available at: www.aerith.net/comet/catalog/0177P/2006.html.)

Next year's Kobau event will be held from dusk on August 11th to dawn on the 19th. Meanwhile, Barnard's comet will have "left the building" and will not return for another 117 years — just in time for the 140th annual MKSP.