Earth at Night: Not a Pretty Sight

In December 1990, during a close flyby of Earth en route to Jupiter, NASA's Galileo spacecraft used its instruments to study our home planet. One interesting outcome was an article by the late Carl Sagan and four colleagues titled "A search for life on Earth from the Galileo spacecraft." They concluded that our planet had four telltale biogenic signatures: the preferential absorption of red light (by chlorophyll), modulated narrowband radio emissions, and the presence of both molecular oxygen and methane in our atmosphere.

The light streaming upward from cities — seemingly a no-brainer — wasn't on the list because it turns out that Galileo didn't take any night-side photographs. That's too bad, because had it done so we might have made much more progress in fighting light pollution by now. 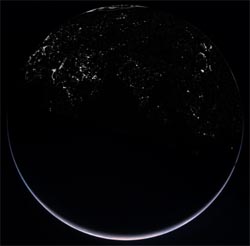 A composite of four images shows the illuminated crescent of Earth (at bottom) and cities of the Eastern Hemisphere. Rosetta's OSIRIS Wide Angle Camera (WAC) recorded the images during a flyby of Earth on November 13th. For a larger view, click here. For a version with labels, click here.

When the comet-bound Rosetta spacecraft made a similar flyby two weeks ago, its wide-angle camera was up and running as the craft approached Earth. And this time, the billions of lights left on to help the craft find its way were very obvious.

As detailed in a press release by the European Space Agency, the spacecraft had an all-too-easy time recording hundreds of urban centers, large and small, across the Eastern Hemisphere. Geography junkies will have an easy time picking out the Nile River valley, Israel, India, and Hong Kong.

I feel sorry for anyone trying to see the stars from within the "thousand points of light" evident in this image. The International Dark-sky Association (IDA) is working globally to control and reduce light pollution, but there's obviously a long way to go. You can help the IDA's efforts by becoming a member.

And here's a final head's up to those of you who are astronomy-club members: through November 30th you can join the IDA for just $20.

Though cities at night can obviously be imaged from space, the Rosetta press image is perhaps a little misleading. If you were a passenger aboard Rosetta looking "out the window" at the Earth, this image is not what you would see. The crescent Earth would be overwhelmingly bright, and the cities would not ordinarily be visible. If you could carefully blocked out the light from the illuminated portion of the Earth, shut off all the lights in your spacecraft, and let your eyes fully dark-adapt, then some of the cities would become visible. They would be faint at a distance like that (80,000km). The image here is a composite of two basic sets of images with radically different exposure and filter settings. It's like taking an image of the Full Moon, cutting it out and pasting it into a deep sky star field. Pretty, maybe, but not representative of reality.

Light pollution is still a problem, of course, and I wish we could create more dark-sky preserves, both for us astronomy nuts and for the ordinary people (there must be more than a billion by now) who have never had the privilege of seeing the Milky Way in all its glory. 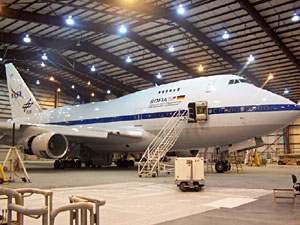 From Ugly Duckling to Beautiful Swan