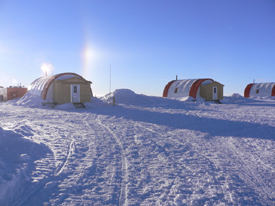 French and Italian scientists currently operate the Concordia Research Station at Dome C, a frozen Antarctic plateau that some astronomers think might have the best astronomical observing conditions on Earth.

One of the most inhospitable places on Earth might also be one of the best places to do astronomy, researchers are now realizing. The frozen Antarctic plateau known as Dome C has winter temperatures down to –84°C (-120°F), air as thin as the top of Mauna Kea, extreme isolation — and perfect observing conditions.

In the June Publications of the Astronomical Society of the Pacific, Suzanne Kenyon (University of New South Wales, Australia) and her colleagues report that the atmospheric turbulence at the Dome C site is exceptionally low. The still air, combined with the high elevation (3.5 kilometers or 2 miles), tiny amount of annual snowfall, and absence of auroras seem to make Dome C a godsend for astronomers seeking the next great telescope site. And for dedicated star-gazers, a bit of cold isn't going to drive them away.

"The working conditions and accomodation are fairly comfortable," says Kenyon. "Although it is cold, the lack of wind and the dry atmosphere mean that working outside is not a big issue."

Currently, the best sites in the world have ''seeing'' ratings between 0.5 and 1.0 arcsecond, the smallest separation they can resolve. But several recent experiments have shown that seeing at Dome C is often as good as 0.07 arcsecond — almost as sharp as Hubble's 0.05. 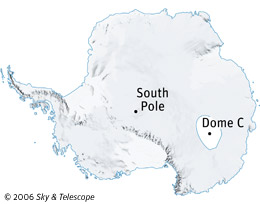 The Antarctic plateau of Dome C is a 1,200-km trek inland, making it accessible only by sleds and specially-modified aircraft. But for astronomers seeking the next great telescope site, Dome C's great seeing could be well worth the journey.

Lured by the promise of the world's finest seeing, several groups are pushing for funds to build telescopes at the site, starting with a 2.4-meter optical, followed by an 8-meter, and, maybe one day, a giant 25-meter. If successful, the groups' high-tech telescopes combined with Dome C's superior seeing could make the isolated Antarctic plateau the greatest — and coldest — star party ever.

An X-ray of the Whirlpool