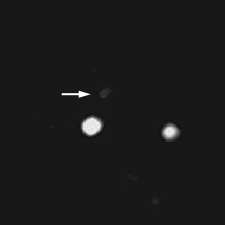 The small faint object identified by the white arrow is J002E3. P. Clay Sherrod captured this image in the early morning hours of September 11, 2002, from Arkansas.

On September 3rd in Benson, Arizona, Bill Yeung discovered a 16th-magnitude object on CCD images taken with a 0.45-meter telescope. It was moving rapidly northeastward across Pisces. He e-mailed the positions to the Minor Planet Center (MPC) in Cambridge, Massachusetts, which quickly posted the object on its Near-Earth Object Confirmation Page under the temporary designation J002E3.

But within a few days of the report, the MPC removed the object from its Confirmation Page; preliminary orbit calculations suggested it was traveling in a large, 50-day orbit around the Earth, not the Sun. It had all the earmarks of being a spent rocket casing or other piece of "space junk" instead of a true minor planet.

But what exactly is it? Efforts by Tony Beresford in Australia and other satellite experts have failed to match this object with any known artificial satellite. Photometric measurements by Peter Kusnirak in the Czech Republic failed to show much variation in brightness, as would be expected of a small metallic object, especially if cylindrical. But the big question is, if it is really in Earth orbit, why has it not been detected before? In Yeung's words, 16th magnitude should have made it "a piece of cake" for survey telescopes or for CCD-equipped amateur instruments to locate long ago.

Still, Brian G. Marsden (Harvard-Smithsonian Center for Astrophysics, Minor Planet Center) remains skeptical that the mystery object is a rocky asteroid. "There is a very remote chance it's natural," he believes. "Just because it hasn't been identified doesn't mean it's not artificial."

"I will be awfully surprised if this is a natural thing captured by Earth," says Marsden.

According to Marsden, the object's geocentric orbit was his first indication that the body was most likely space junk. But to be certain, he suggests that astrometric stations continue monitoring its motion and that radio telescopes observe the mysterious body. A detailed ephemeris is available from the Jet Propulsion Laboratory's HORIZONS System.

"Radar ought to be able to tell us pretty quickly if we are seeing a polished metallic surface or a natural surface," says Marsden. "Radar would settle it once and for all."

Meanwhile, using the observations available so far, JPL's Paul Chodas concludes that J002E3 is possibly a leftover Saturn-IVB stage from one of the Apollo missions of the late 1960s. His report includes an animation of the object's recapture by Earth in April 2002 after being in a heliocentric orbit for several decades. This recapture, incidentally, explains why it eluded detection until now.