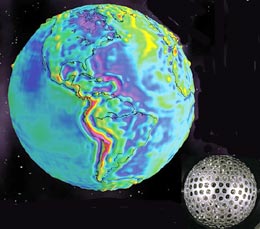 Gravity's complex picture, and a LAGEOS satellite. The relief map indicates the slight deviations of the Earth's gravitational field from that of a perfect ellipsoid. Red indicates higher deviation, blue lower. (The actual map is vastly more detailed than shown here.) Each LAGEOS satellites is a passive, heavy sphere covered with retroreflector mirrors for accurate laser ranging. Before subtle effects of relativity on the satellite's path can be measured, the effects of Earth's irregular gravity have to be removed to high precision.

Yet another prediction by Einstein's general theory of relativity seems to be holding true: a rotating body, such as Earth, should slightly twist the space in which it is embedded. Two physicists who have been tracking satellites orbiting Earth claim to have made the first reliable measurement of this effect. Others remain unconvinced — but a different experiment should soon settle the question once and for all.

The effect in question is called "frame dragging," a very slight twisting of space-time induced by any rotating mass. (Think of a ball bearing spinning in syrup.) The phenomenon is more formally known as the Lense-Thirring effect, after the Austrian physicists Joseph Lense and Hans Thirring, who predicted it in 1918 two years after Einstein published general relativity. Frame dragging is a form of "gravitomagnetism," a set of secondary space-warping effects that should be caused by mass in motion — somewhat analogous to the way magnetism stems from electric charges in motion. (The parallelism here may have helped keep Einstein on his futile life quest for a unification of gravity and electromagnetism.)

Writing in the October 20th issue of Nature, Ignazio Ciufolini (University of Lecce, Italy) and Erricos C. Pavlis (Joint Center for Earth Systems Technology, Maryland) claim to have made the first reasonably accurate measurement of frame dragging. They tracked the paths of the two Laser Geodynamics Satellites (LAGEOS I and II) for 11 years using laser rangefinders. They find that Earth's rotation twists the fabric of space enough to displace the satellites by 1.9 meters per year from where they would otherwise be, matching the amount predicted by general relativity with a measurement precision of about 10 percent.

Ciufolini has previously reported signs of frame dragging in the LAGEOS satellites' orbits, but this finding met with skepticism (Sky & Telescope: July 1998, page 22). Since then, Earth's irregular gravitational field has been mapped about 50 times more accurately, thanks to the GRACE satellite mission. However, independent LAGEOS expert John C. Ries (University of Texas) is still not convinced. "It is uncertain if the GRACE gravity models are good enough yet," he says.

NASA's Gravity Probe B satellite will soon provide a more direct measurement of frame dragging that should also be much more accurate. Launched last April after 40 years of planning and development, Gravity Probe B was designed primarily for this purpose. Its results, which should be announced in mid- to late 2005, are expected to be good to 1 percent.

Large amounts of frame dragging have already been inferred indirectly from the behavior of matter in the extreme gravitational environments near spinning black holes.