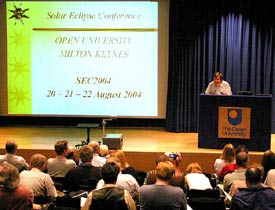 Patrick Poitevin welcomes participants of the 2004 Solar Eclipse Conference, held at the Open University in Milton Keynes, England. Click on the image to see a larger display of this photo.

From basic eclipse observation tips to complex solar physics, 25 presentations fascinated the more than 100 amateur and professional attendees from 20 nations at the 2004 Solar Eclipse Conference. The event, which was organized by Patrick and Joanne Poitevin, was held from August 20th to 22nd at the Open University in Milton Keynes, England.

Astronomer Serge Koutchmy (Institute of Astrophysics, Paris) explained how amateur and professional astronomers could obtain high-resolution images of the corona during total eclipses by attaching a short-exposure CCD camera or inexpensive webcam to a small telescope. Such a modest setup can show the ever-changing structure of the corona. Koutchmy and other scientists can compare these pictures to SOHO and TRACE images taken at invisible wavelengths to resolve the overall structure of the inner and outer corona. 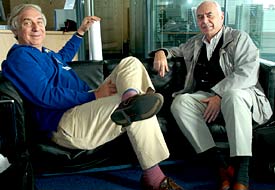 Astronomer Jay Pasachoff (Williams College) described current solar-eclipse science, including how the solar magnetic field heats the corona. Surprisingly, the corona is hundreds of times hotter than the Sun's visible surface (the photosphere), which is much closer to the energy-producing core. Pasachoff is currently obtaining more complete views of the corona by combining eclipse images from the ground with pictures taken from SOHO and TRACE.

Many of the presentations and posters focused on eclipses in history. A documentary by Canadian filmmaker Jean Marc Larivière showed how movies from the early 1900s to the latest Hollywood flicks have immortalized the ethereal sight of the totally eclipsed Sun. Several other lecturers discussed early eclipse photos, drawings, and maps. Richard Stephenson (University of Durham, England) used ancient eclipse records to estimate how the length of day has changed due to the slow decrease of Earth's rotation. 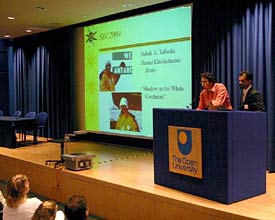 Babak A. Tafreshi, author of this article, describes his November 2003 trip to Antarctica to observe a total solar eclipse.

Since few experienced eclipse chasers managed to observe the November 23, 2003, total eclipse from the remote continent of Antarctica, I filmed a documentary that took the audience on an adventure expedition on the Russian icebreaker Kapitan Khlebnikov. Hamid Khodashenas produced this movie.

Fred Espenak (NASA/Goddard Space Flight Center), who operates the Web site MrEclipse.com, advised attendees where to observe the next several eclipses. He plans to observe over 30 seconds of totality of the April 8, 2005, annular/total eclipse from sea at a spot nearly 2,000 kilometers (1,200 miles) west of the Galapagos Islands. He will be stationed in Libya for 4 minutes of totality during the great March 29, 2006, total eclipse. 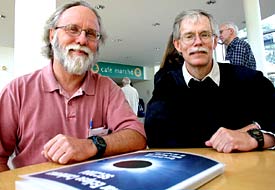 Canadian meteorologist Jay Anderson, well known for his accurate weather and climate statistics, recommends traveling to the Galapagos Islands or the Panama coast for the April 2005 eclipse. Southwest Turkey seashores and the Libyan desert offer the best weather prospects for the March 2006 eclipse. Eastern China and western Mongolia have a good chance of clear skies for the one on August 1, 2008.

More than 100 amateur and professional astronomers attended the 2004 Solar Eclipse Conference. Click on the image to see a larger display of this photo.

If you would like to attend the next Solar Eclipse Conference, mark your calendar for August 24–27, 2007, which is right before the August 28th total lunar eclipse. The gathering is tentatively scheduled for the newly renovated Griffith Observatory in Los Angeles. For more information, visit the Solar Eclipse Web pages of Joanne and Patrick Poitevin.
You can also join a mailing list of more than 300 experienced eclipse observers.

Babak A. Tafreshi ([email protected]) is an editor of the Iranian monthly astronomy magazine Nojum. He welcomes you to visit his photo gallery.